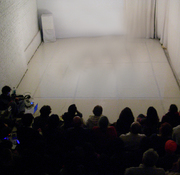 This season at Home Series offers an exciting way to be an active spectator by presenting the practice-work of Maximiliano Balduzzi. This AcTS is part performance, part demonstration, part lecture, and part hands on exploration into the principles surrounding the processes of LEIMAY guest teachers. You can choose to participate as an observer audience or physically by joining the exercises and explorations.

Maximilian Balduzzi is an Italian director, performer, teacher and CAVE Resident. He holds a degree in theatre from the University of Bologna. For the past 15 years he has dedicated himself to studying physical and vocal training for actors. Maximilian has worked nationally and internationally with artists such as Ben Spatz (Urban Theater Research), Arturo Vidich, Mario Fratti, James Scruggs, and Anne Zenour with whom he co-founded Teatro della Pioggia. Maximilian has recently taught workshops and master classes at Lincoln Center, Emerson College, Brooklyn College, The College of Staten Island, CAVE, and Actors Movement Studio. Together with Ben Spatz, Maximilian was a 2009-2011 Movement Research Resident Artist.