It began with instant attraction.  Dancer and choreographer Yana Schnitzler had worn a bracelet with a magnetic clasp when dining at a restaurant.  While reaching towards the table, a fork became attached to her bracelet, dangling from her wrist.  That event provided inspiration for her to explore the effects of magnetism on the human body and, ultimately, led to the collaborative performance entitled mag.net, sponsored by the Lower Manhattan Cultural Council and the New York City Department of Cultural Affairs. 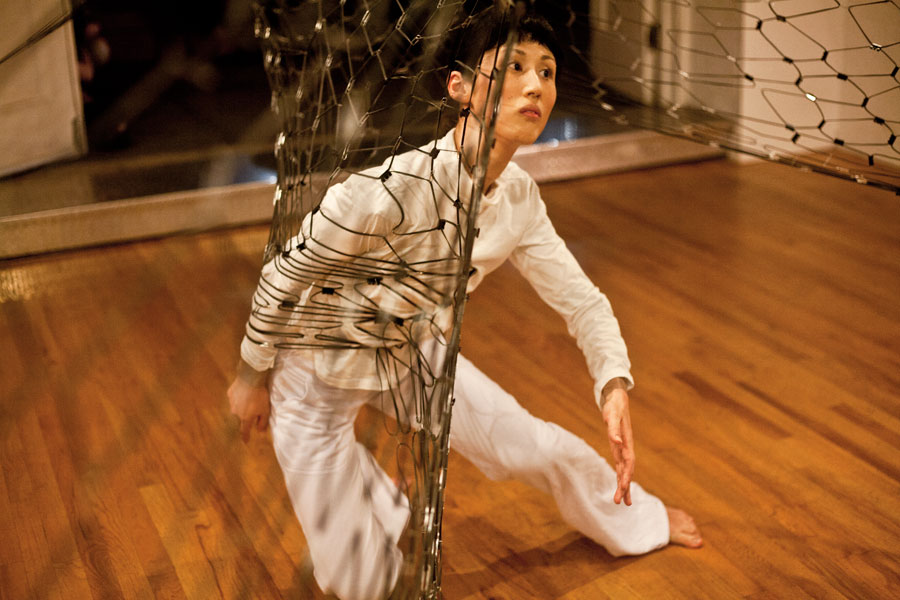 Schnitzler, founder of Human Kinetics Movement Arts, works frequently with fabric and the ways in which it can interact with the body and with spatial environments.  A slow, sinuous technique that allows dancers to connect to their own source of movement, Human Kinetics engages spontaneity and change as means of capturing motion on a very subtle level, leading to expression flowing out of the body.  In her practice, Schnitzler is most strongly interested in the transition between occupied and unoccupied space in relation to bodily movement.  In utilizing fabric, she manipulates the bodies of dancers to reveal lines and angles that underline the shape of the human form, yet also conceal the body.  In such works, fabric functions as a vehicle to amplify movement and create connection to freestanding objects in the performance space, such as a wall or railing, to further create connection between dancers and the space. The prior works of Human Kinetics Movement Arts have involved collaboration with architectural designers, such as Eva Perez de Vega and Ian Gordon of e+i Studio.  Through their design studio, Perez de Vega and Gordon have engaged in creative partnership with dancers to complete installations that contribute to embodying the transitory nature of space.  In their work, they view architectural design as a method of configuring space through movement rather than as a stationary series of programmatic volumes or blocks.  The creation and negation of space are of equal importance for them in designing environments whether used for dance or for commerce.  When designing for dance, they choose to investigate the probabilities inherent to the development of mutable spaces where the environment holds the potential to take on different adaptations through time.  Dance, as a function, requires a space that can accommodate the needs of the dancers moving through it.  Perez de Vega, herself a dancer, believes that architecture itself can be thought of as a form of choreography in that it is a dynamic, applied art that involves consideration for the circulation of people in, around, and through a built space.  Such considerations might involve the speed of movement through a space, whether quick or slow, that may vary in addressing the needs for design of particular building types, such as a residential dwelling or an office.  Dancers, she feels, also think about space regularly in their craft, but in a very different way. 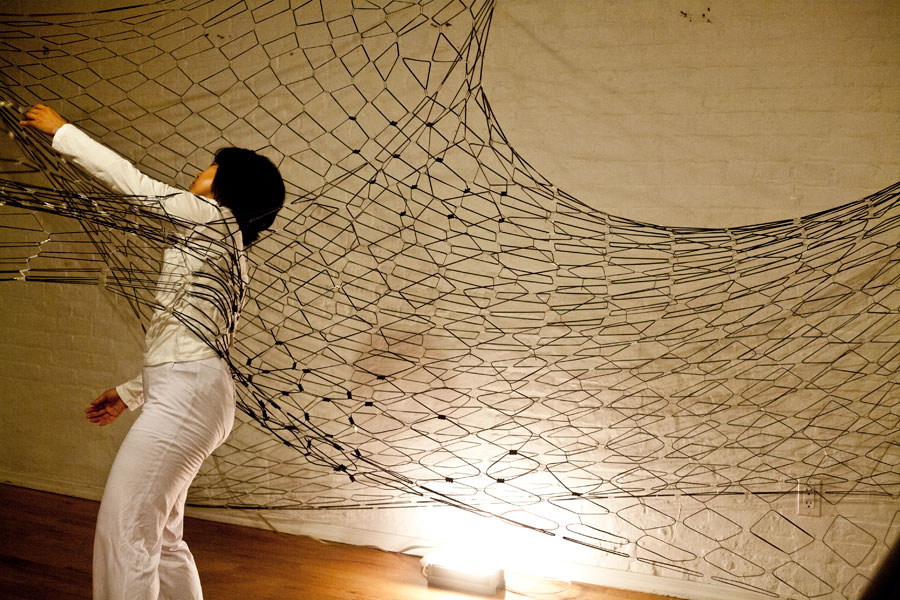 Together, Human Kinetics Movement Arts and e+i Studio share an approach that is complementary in nature, where movement and space are continually engaged and connected.  Their mutual explorations involve the inherent presence and potential importance of negative space, which can often be taken for granted.  Architecturally, forms create voids within a structure, sometimes static, at other times mobile, allowing for places of passage.  In performance, a voided space is often more adaptable, continually changing depending on when and where dancers complete a series of movements on the stage. In the creation of mag.net, which e+i Studio terms as a site specific installation with performances, the collaborators began by examining the potentiality of two unseen forces that impact upon the human body, magnetism and movement.  With initial architectural studies involving the use of linear, metallic elements, subsequent concepts developed led to the creation of a tensile, or attenuated, architectural form similar to a spider’s web that would be pliant, receptive, organic, mobile, and definitively attractive.  In order for the form to encompass the entire performance space, the design would be suspended from the walls and ceiling of the performance venue.  The choreography, in turn, would be imbued with similar qualities as a means of creating a symbiotic relationship between the dancers and the web.

The resultant architectural form for mag.net, created largely from reusable and recyclable office products, embodies magnetic properties through the use of two different types and weights of metal paperclips.  Taking approximately one week to weave, the web is rendered pliant by connection to biodegradable rubber bands, which allow the form to give significantly upon contact.  While the magnetic force itself is invisible, objects that magnets are drawn to are often visually evident.  Complexities in development of the performance resulted from the need to work with, and not against, the properties of magnetism.  As such, the choreographic intention of bringing the dancers in contact with the metal clips called for the development of specially designed, responsive bodysuits weighted with magnetic pieces, to ultimately concentrate on the essential interaction between the metal components and the magnets in the dancers’ costumes.  Thus, a seamless integration would be created in the performance piece, where the movement of a dancer within the weblike architectural form would create a significant impact upon the architectural form.

Held in four successive weeks at Tribeca’s intimately scaled Space on White, the performance of mag.net follows the choreographic and architectural intent of its creators by moving away from a scripted narrative to a place of reconfigurable and unpredictable series of interactions.  The entry doors of Space on White are opened to the street, creating a darkened window wall which gives depth to the performance stage, and allows viewers standing on the street to see inside.  The style of Human Kinetics allows the dancers (Masumi Kishimoto and Akiko Bo Nishijima) to interact with the architectural form, and simultaneously allows viewers to respond to that interaction.  The nature of the architectural form enhances the qualities of subtlety in the dance, where the movement of the web yields to the interaction and physical contact of the dancers, taking on a life of its own as the tensile form itself is reconfigured, rippling through expansion and tension.  Shapes created through connection between the rubber bands and paperclips, at first rectilinear, morph into loop like segments that further stretch and decompose with time over four successive performances in the four week cycle.

There is a noticeable absence of prerecorded sound in mag.net.  Throughout the performance, which is conducted in silence, one hears the sound of the magnets grasping for contact with the metal elements of the architectural form and pulling the dancers’ bodies along, augmenting the visual sense.  A clipping noise resonates through the space once the dancers move out of range of the metal objects in the architectural form, creating another point of tension as they separate from the web.  mag.net captures individual sensibilities of engaging the body through movement, while also drawing upon an awareness of the body in relation to its surroundings.  Ever changing in motion, mag.net gives spectators a perspective on the layers of life as its dancers move forth as human elements circulating in and out of a biodegradable, recyclable spider’s web.