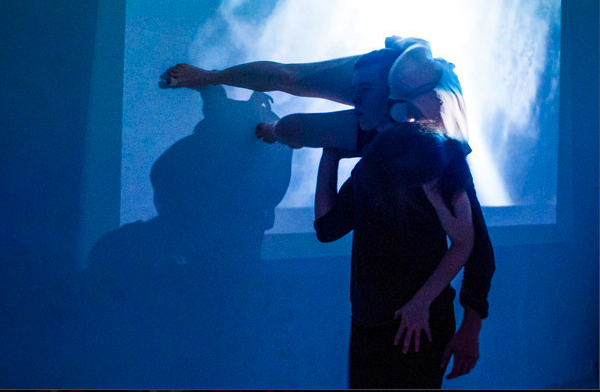 Hands to floor, feet to wall, legs astride two others.  I ascended the stairs to reach The Alchemical, a performance, screening, and rehearsal theater bordering the West Village and Chelsea, and was greeted with a soft and familiar floral scent; incense alight.  Upon entering, I stepped into a white staging space without borders, save for the four walls of the room.  It was the studio housing Mapping the Void, a dance installation by VESSEL which consisted of three consecutive performances in one night.  Immediately I saw members of the company, which typically ranges from one to seven dancers, executing warm ups before the beginning of the performance: pirouettes, leg lifts, and stretches.

As a lover of maps from childhood, I held in my mind a view of the program as a possible melange of the cartographic and kinesthetic.   Chairs were done away with to provide an open space for the dancers; if one wished, seating was provided in the rectilinear studio on block like modules.  I chose to stand for the first of two viewings, as did many others. VESSEL’s founder and choreographer, Annette Herwander, encouraged audience members to traverse the space and encircle the performers at any and all times. The performance began with light diodes illuminating the bodies of the company members, some of whom remained in a state of near stillness for several minutes.  The silhouettes created by the diode panels lent depth to the stage, and created a boundary line that framed the surrounding space.  A repetitive sound pattern enhanced these qualities, complementing the static nature of the light panels.  Gradually, motion was initiated by the dancers in the center of the stage as well as at the peripheral walls, figuratively mapping the space.  I was struck by their movements, with hands planted on the floor and feet to the wall, which gave me the feel of acrobatic gestures.

The dancers moved around the audience members who, concurrently, were also moving around the periphery of the stage.  As points on a linear plane, spectators at the peripheral walls became a living, breathing portion of the performance space.  This organic relationship was sustained by members of the company as they interspersed themselves between viewers along the walls of the stage.  I chose to stand near a video projector and, sometime during the show, Herwander was suddenly at my feet, moving through a choreographic passage.  I inched away from her, perhaps shyly, so that she could continue her portion of the dance. Video was used to texturize the space, again bringing depth to the room.  Performers moved through the video feeds, all the while drawing upon contrasts; male and female, male to male and female to female, upright and tilted, vertical and horizontal, linear and circular, parallel and perpendicular.  These oppositional patterns were continued through subsequent portions of the performance where music and dance drifted from a modern typology to a more classical expression.   Closing with the rhythmic movement of feet against ground, which reminded me of walking upon sand, Mapping the Void charts motion with a means of drawing viewers inside.