Eleanor Antin uses the body as material for her art piece Carving: A Traditional Sculpture (1973). This work of art comprises 148 black-and-white photographs documenting the artist’s loss of 10 pounds over 37 days. Every morning she was photographed naked in the same four stances to record her barely perceptible self-induced weight loss. Antin’s performance purposely toyed with the traditional process of Greek sculptors, who were said to find their ideal form by chipping away at a block of marble and discarding any unnecessary material. The artist’s idea of “carving” her own body was inspired by an invitation from the Whitney Museum of Art for its biennial survey exhibition, which at the time restricted itself to the established categories of painting and sculpture, though this work was considered too conceptual for the exhibition. Antin’s piece uses ideas of physical plasticity and material pliability to create a symbolic relationship between the artist’s body and the traditional art making techniques. Antin’s intentional chisels her body through dieting, creating a resonance of the decaying and cassable qualities of the human body. 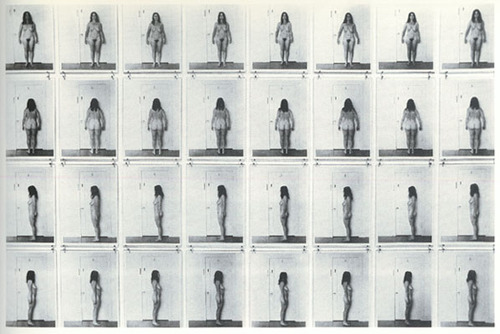 An unusual and interesting performativity piece is Gordon Matta Clark’s Splitting (1974). In this piece, Matta-Clark sawed two parallel slices through a nondescript wood-frame house in Englewood, New Jersey, and removed the material between the two cuts. In addition, he cut out the corners of the house's roof, which were subsequently shown at John Gibson Gallery in New York. He made similar gestures in some of his photographs, cutting the actual negatives rather than manipulating individual prints. The physical process became more important than the final perfected vision. Shirtless and sweaty, Matta-Clark and a laborer are shown rhythmically hammering away at the house’s foundation. This piece uses the act of cutting in half the quintessential suburban American home to evoke the disintegration of the American family, as well as more personal parental trauma of the artists. Is also an oda to the rejection of art as a commodity and an important piece in the history of site-specific art. 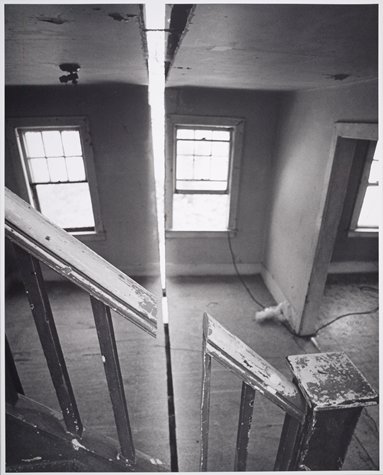 Ana Mendieta’s Untitled, from the Silueta Series (1976), which performative qualities are based in the body and its trace, is also subject of our study. The Cuban born artist documented private sculptural performances enacted in the landscape. In this series, created on location in Iowa and Mexico, Mendieta carved and shaped her own figure into the earth to leave haunting traces of her body fashioned from flowers, tree branches, mud, gunpowder, and fire. Mendieta’s use of the body in the landscape invoke and represent the spirit of renewal inspired by nature and the power of the feminine. Figures with arms held overhead to represent the merging of earth and sky; floating in water to symbolize the minimal space between land and sea; and with arms raised and legs together to signify a wandering soul. Yet another piece of our study is Dennis Oppenheim’s Parallel Stress (1970), In this work, Dennis Oppenheim documents of two actions Oppenheim performed in New York State in May 1970. The work comprises two individually framed black and white photographs and a section of typewritten text on blue paper, also framed, that are displayed in a column, one above another. In the first action, shown in the upper image, the artist stretched his body between a masonry-block wall and a collapsed concrete pier at a location between Brooklyn and Manhattan bridges in New York City. He held this position for ten minutes, straining against the pull of gravity to maintain a horizontal position. According to the text, the photograph was taken at the ‘greatest stress position prior to collapse’. The image shows the artist’s body curving downwards between his arms and hands – gripping one set of breeze blocks – and his feet – hooked onto another parallel wall also made of breeze blocks. His back arches as he hangs face-down into empty space. The second image, installed below the first, shows the artist’s body in a similar position, parallel to that assumed in the first. For this photograph, Oppenheim lay in a large V-shaped dip between two mounds of earth in an abandoned sump on Long Island. The short section of text positioned at the bottom notes the basic facts of the performance. These interventions on the landscape proposed a dialogue with time in ways that art had not done before until its date. Oppenheim use of the body to cover what he identify to be scars on the land, juxtaposing ideas of natural and artificial material, construction and decay, through the use of his own body and the industrial city landscape.