Performativity and the Body: Physicality, Materiality, and Trace Going further in the study of the symbolic action in Contemporary Art, I encounter a dilemma. Since the notion and performativity is always linked to the use of the body and the physicality and materiality of the art piece, should I create a specific chapter that will focus on this matter? I understood for these characteristics to be inherited in the work, so I was hesitant and quite worried that I would be reducing important performativity works to its most obvious nature.

Performativity is understood to be attributed to living and nonliving medium and material used in a work of art, so would centering on the tangible aspects of this phenomenon add more value to the research? My answer was an absolute yes. The study of symbolic action in art would be totally incomplete without the inclusion of artists that enhance this particular feature in their work. The purposeful use of the body as medium and the creation of permanent and ephemeral surrogates to hold its symbolic meaning is key to understand the complex and rich nature of performativity.

One of the most reproduced and cited pieces that support our study is Chris Burden’s Trans-Fixed performance enacted in 1974. For this piece, Burden lay face up on Volkswagen Beetle and had nails hammered into both of his hands, attaching him to the car. The vehicle was pushed out on the street and the engine revved for two minutes before being pushed back into the garage. This act recalls religious imagery of crucifixion. Burden’s presentation of himself as a martyr of contemporary consumerism is read by the symbology of the nails, the gesture of his body, and the use of the Beetle that stands for the middle class Californian car. Another piece that focuses on the material aspects of performativity is Yves Klein’s Anthropometric of the Blue Epoch performed in 1960 at the Galerie Internationale d’Art Contemporain in Paris. In this event, Klein, dressed in a tuxedo and white tie, directed two nude female models who sponged themselves with Klein’s signature blue paint. The models imprinted their bodies onto large sheets of white paper attached to the walls, climbing on to pedestals of different heights to create a rhythmic composition of silhouettes. A third model was cover with blue paint and dragged across a large sheet of paper on the floor. Throughout the performance, a group of musicians played Klein’s Monotone Symphony: twenty minutes of one-note music, followed by twenty minutes of silence. Klein uses female bodies as brushes, playing with the ideas of abstraction and figuration. For Klein, blue was the most abstract of all colors since it only suggested the sea and the sky, in themselves, ideas beyond dimensions. The use of the female body made a reference to the history of art and the notion of the woman as creator. Klein’s white tuxedo made him merge visual with the paper canvas, also mimicking a guiding and patriarchal figure of god.

Engaging the audience with the physical body of the artists, Carolee Schneemann performed Interior Scroll at Women Here and Now, an exhibition of paintings accompanied by a series of performances that took place in East Hampton, New York in August 1975. In front of an audience comprising mainly women artists, Schneemann approached a long table under two dimmed spotlights dressed and carrying two sheets. She undressed, wrapped herself in a sheet and climbed on the table. After telling the audience she would read from her book, Cezanne, She Was A Great Painter, she dropped the sheet, retaining an apron, and applied strokes of dark paint on her face and body. Holding the book in one hand, she then read from it while adopting a series of ‘life model “action poses”’ She then removed the apron and slowly drew a narrow scroll of paper from her vagina, reading aloud from it. Schneemann work is well known for refusing the divorce of the sexual experience from art making. The artist intended a return to the body as a source  of knowledge and experience and to unify its internal energies with the visual information it provides. Schneemann thought of the vagina in many ways – physically, conceptually: as a scultural form an architectural referent, the source of sacred knowledge, ecstacy, birth passage, transformation. She saw the vagina as a translucent chamber of which the serpent was an outward model: enlivened by its passage from the visible to the invisible, a spiralled coil ringed with the shape of desire and generative mysteries, attributes of both female and male sexual powers. This source of ‘interior knowledge’ symbolized the primary index unifying spirit and flesh ... the source of conceptualising, of interacting with materials, of imagining the world and composing its images. 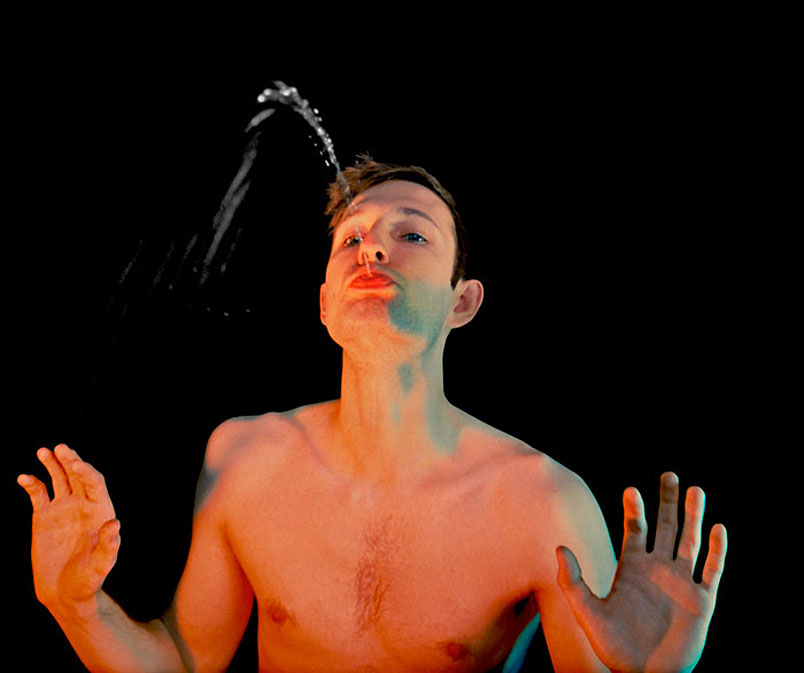 Bruce Nauman, made used his body in a more theatrical way. In Fountain, a photograph part of his Eleven Color Photographs (1966-1967) series, Nauman presents himself in front of the camera while he spits water playfully out of his mouth. This is a mimic of Marcel Duchamp’s piece of the same name Fountain (1917). Bruce Nauman questions traditional ways of making art, rethinking what art is, what artist might do, and what art can be. Nauman thinks of art as a type of research or investigation. He is interested in the ways that ideas and activities can be transformed into works of art. Nauman has often used his own body in his work and he has recorded his activities in his studio with photography and video. His work includes the exploration of language, puns, and humor in art.

Using the abstract idea of the body and sexuality, Vito Acconci developed Seedbed in 1972. Acconci performed Seedbed intermittently at New York's Sonnabend Gallery. On days he performed, visitors entered to find the gallery empty except for a low wooden ramp. Below the ramp, out of sight, Acconci masturbated, basing his sexual fantasies on the movement of visitors above him. He narrated these fantasies aloud, his voice projected through speakers into the gallery. A video documented the performance. Acconci uses the symbolism of the space separating the two bodies (his and the audience’s), the asexual concept of the seed, and the act of masturbation to draw lines between the conventions sexuality, the nature of sexual desire, and the role of the physical body.