Under the watchful eye of the enigmatic Yoshihara Jiro, the Gutai movement developed to be what may be considered the most undervalued and forgotten chapter of Japanese contemporary art. Although well received abroad, the group of multi-disciplinary artists gained little acclaim domestically outside their native Kansai region. In what was an attempt by Yoshihara and his subsidiaries to ‘self-actualize’ and fully embody a ‘spirit’ or geist of a post-atomic, post-war Japan, the group sought to create art unlike any that had existed in the past.
The success of such an audacious project can be measured in its recent institutional recognition and praise in the last 10 to 15 years. This has been demonstrated by the group’s inclusion into the Musuem Kunstpalast’s ‘ZERO: Internationale Künstler-Avantgarde der 50er/60er' in Düsseldorf and at the Musée d’Art Moderne Saint-Etienne (2006-07); the inclusion of artists at the La Biennale di Venezia ‘53a. Esposizione Internationale d’Arte: Making Worlds Exhibition' (2009); more recently ‘Gutai: A Spirit of an Era’ at the National Art Centre in Tokyo (2012); as well as the upcoming ‘Gutai: Splendid Playground’ at the Guggenheim in New York scheduled early next year.

This ‘rediscovery’ begs an explanation—for what is it about Gutai that is so relevant to contemporary art practice and society today? One may conclude that this newfound resurgence is a mere fascination with the tempestuous past of the 20th Century at a time that seems exhausted in comparison. Others may hint at the greater issue: a case of a removed, yet relevant chapter to the development of Western contemporary art. Whatever the case may be, we are led to believe that the group are of great significance today. Small scale retrospectives and group shows staged in Japan between the group’s disbandment in 1972 until now have portrayed the group as purveyors of the avant-garde across the disciplines—whether it be in performance, painting, land art, environmental art and installation. What is problematic is that this perception overstates Gutai as an embodiment of cutting edge ideology. What needs to be explored is the reality of Gutai as a group itself: its influences, its structure and its resurgence.

Throughout Gutai’s career, Yoshihara’s aesthetic dictated the development of the group’s practice and ethos. Gutai was to represent a movement imbued with the sense that is was “present concrete proof that [...their] spirit is free.”[1] Such a claim is grounded in the word ‘Gutai’ (具体) itself—translated to ‘concrete’, and or the tangible and material. It seems contradictory that during the group’s 18-year career, the only discernable consistency is the group’s state of flux. Acting as both the informers and the informed, Gutai attempted to abide its own idealistic mottos: “do not imitate others” and “engage in newness”. With enough historical perspective, this bold stance must be viewed in some scrutiny—for Gutai drew extensively from art movements both in Japan and abroad. Thus, when attempting to define the essence of Gutai, we must look beyond this tangible and concrete reality and past a group heralding "newness". Instead we look to its particular social climate: the exchange of information and ideas both within the group and abroad, as well as the effects of a post-war, post-atomic society. Shiochi Hirai’s—curator of ‘Gutai: A Spirit of an Era’—confirms this notion and attributes these sensibilities as a reaction to the times. Using the violent actions of Shriga Kazuo’s Challenging Mud and Murakami Saburo’s Passage as examples, he explains the gesticulation of violent and primal actions moved beyond a pursuit of avant-garde performance and new abstract expressions based on the precepts of not copying others and making something that had never been made before. More importantly however, these works were focused on a spiritual undertaking that involved consistently embracing the spirit of the individual artist as motif. To then take this motif and transform it into something as raw as the performances of Kazuo and Saburo, we see that the individual artist personified the social climate of post-war Japan. Hirai sees “a tabula rasa" in this mode of performance in the wake of Japan’s military defeat, and goes on to say this represents an inner desire to re-examine their being on a physical level[2]. This self-actualization is in part, the essence of Gutai and perhaps what makes it so attractive today—for we find ourselves incapable to enact the same path of realization. Our desire to rediscover Gutai is an indicator of our desire to reflect on our being—not in a post-atomic age, but a time less finite and identifiable. 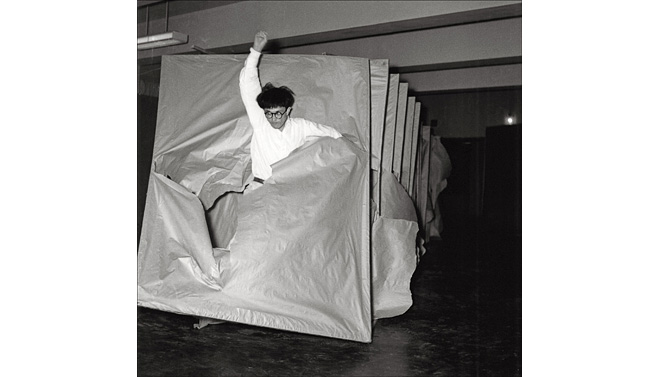 A removal from the Western art canon frames Gutai in a way that sits geographically on the ‘outside’. However, the saving grace of Gutai is when aligned within or against this canon, it does not conjure a sense of otherness, cultural artefact or subject of sociological study. Rather, we regard the group as a well informed, globally aware, collective of instigators of the trends of modern art. An alliance between Jiro and French Art Critic Michel Taipé launched Gutai onto the international stage and allowed for a dialogue between the group and the French counterpart to Abstract Expressionism: Art Informel. Aligned with Taipé’s notion that Abstract Expressionism simultaneously emerged in the West as some distinct and ‘universal’ post-war visual parlance, Gutai came to understand their ‘being’ in similar geometric forms and performances of repetitive actions. This, of course, was not the sole route of information and dialogue with the West for Gutai—although Jiro did persuade members of the group to focus on painting for the sake of shipping to and from Paris. Gutai built its international network—evident in the inclusion of Gutai in Allan Kaprow’s ‘Assemblage, Environments and Happenings’(1966) and the distribution of Gutai’s journals to the likes of Jackson Pollock. To dissect this global relationship, we should look to the inverse relationship between American performance art and Gutai. When exploring this relationship, you can see Gutai’s approach to performance dissimilar to their American counterparts—namely due to their ability to self-actualize a geist more on a more profound and inter-personal level. Absent of a war at home during WWII, American performance did not react to a schismic shift in an ideology of life until the late 60s and 70s in the way that Russian Constructivists, Guati and Dadaists had done before them—in anticipating (if not explicitly formulating) the basic tenants of the Performance art before the 60s and 70s. Pierre Restany wrote in awe of performers “lacerating canvases and paper screens, combustion, explosions of assorted objects, and sonic amplifications, exhibitions in the open air with cloth undulating in the wind etc.,”[3] in the Informel journal Quadrum in 1962. By the next year, Restany after a visit to Japan, raised "the troubling coincidence: the ‘performers’ of New York Happenings would have had a direct precursor in Japan.”[4] This does postulate Gutai as some sort of pin-up for performance art when in fact, it has been noted that Gutai—in its search for ‘newness’; borrowed, stole, re-appropriated and reused techniques from around the world.

It is problematic that Hirai raises a counter argument claiming the photographic evidence and documentation of such performances “led to the group’s reputation as pioneers in performance art without explaining that the pictures were actually taken at displays of the artist’s production processes that were staged for the media instead of being performed for a crowd of spectators.”[5] We are led to believe that the emphasis is thus on the end product over the process and idea—an inverse conclusion to that of Kaprow’s happenings, the Viennese Actionists, or the performers of Fluxus. It is unfortunate that this conclusion has to be made, for there are many other performances within Gutai’s history which have not manifested in the same manner—albeit these are performances coming from the an experimental theatre and a Butoh tradition. There are those who you would believe fall in to the latter category such as Shiraga Kazuo’s Sanbuso-Super Modern in which he dresses in a red Pinocchio suit and hangs on a rope, painting as he swings from the ceiling. What seems to be a temporal, time-based exploration of the body in movement is not immune from commoditisation for the paintings have been now exhibited, sold and collected. Here we arrive at the conundrum that many involved in performance art arrive: does performance need to be translated to the material in order for survival—whether that be in the monetary sense or otherwise?
These are such questions Gutai raises and it is here that perhaps our more recent fascination with the movement stems. Gutai—although experimental and forward thinking, encapsulated an era, a spirit that has not waned, rather expanded—for we still see the same issues and ideas re-circulating and being addressed today. It is of course now more apparent why Gutai is experiencing somewhat of a rebirth as more and more turn to this forgotten chapter of Japanese contemporary art and contemporary art canon as a whole as a means to advance our understanding and perceptions on how elements of art—in this case how performance art has manifested over the last three to four decades. For the moment, we eagerly anticipate the Guggenheim’s take on Gutai in the coming months to see if indeed our spirit of an era does find a discovering in the trials of Gutai.