Noemie LaFrance wants you to start a revolution.  With 10+ years of theatre and choreography under her belt, her latest project CHOREOGRAPHY FOR AUDIENCE – TAKE ONE aims to take on the rapid changes technology brings to our lives and how it effects the ways we relate to one another..

Can you tell me a little bit about the origins of Choreography for Audience – Take One?

I had the idea in 2006 – it started with Agora, the piece I did at the McCarren Park pool.  I wanted to create an experience where the audience really felt like they were part of the space.  I’ve always been very interested in audience interaction, but a lot of my work has been very visual.  A lot like film.  I’ve always tried to push things further.  Make people do more.

Personally, audience interaction makes me tense.  Do you find that in order to get an audience involved, you have to coax a little bit?

It’s about guiding an audience through an experience that inspires them to get involved.  It’s not like it used to be where an audience would scream or throw tomatoes.  Now, the audience is super behaved and claps even if they don’t like it.

How important do you feel the role of location plays in your work?

My work is site-specific, so it is always based on a space.  In this case, it’s almost like the performers are the architecture of the space.  We’re making these patterns so the participants become like living sculptures.

And what are you hoping the participants gain from this experience?

I feel like it’s time to leave your computer and phone alone and come play with other people.  I think this project is certainly about that.

Sort of a call to action.

With the internet we have so much access to information and other people, which is important to the fast development of our culture, but at the same time it’s pushing us away from each other physically.  A lot of times our bodies are the last priority.  The truth of the matter is if there’s no body, there’s no you.

Sometimes I imagine people just laying down, closing their eyes, and seeing their Facebook feed in their minds.

In relation to our bodies, I think the importance of connecting with people in real time and space is something we’re not doing anything about right now.

You’re taking a big risk asking hundreds of people to show up to see if this game you have developed even works.

I’m incredibly grateful that people are offering their bodies for this performance.  They’re offering it for the group.  I’m lucky that they trust me to make something.

And you’re not inviting anyone to come watch the performance.

The experience is what matters to me.  I didn’t want to have an outside audience because often times in our culture people feel like ‘I want to check this out, but don’t want to get my feet wet.’  That’s what the computer allows you to do: participate from a safe distance, without getting involved. 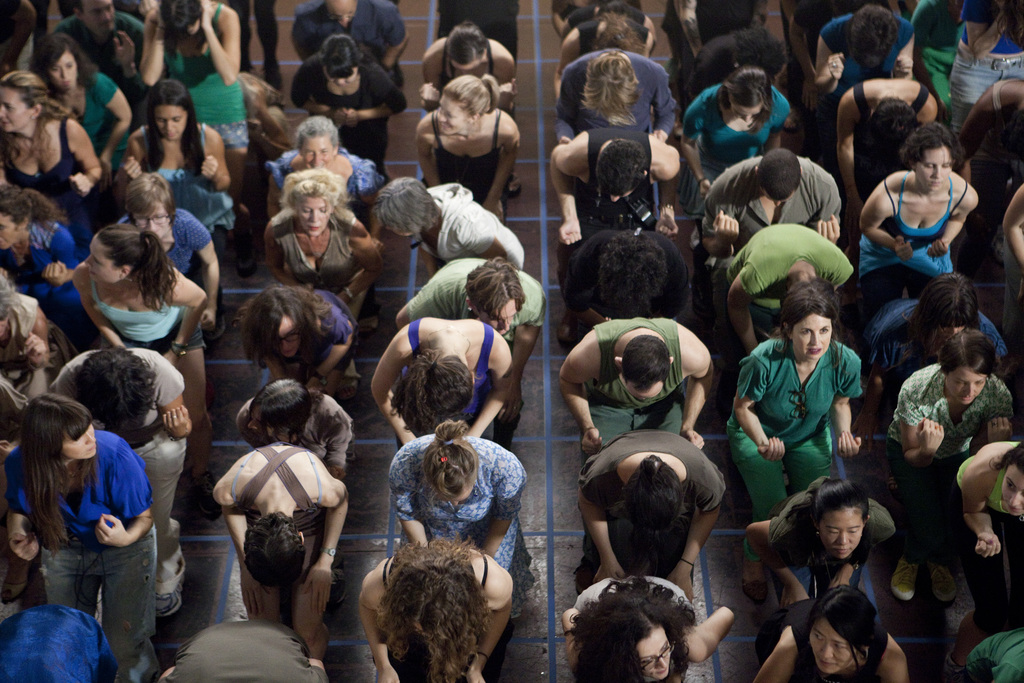 I guess that’s true.  So what is the purpose of filming this experience?

It’s going to serve as a key.  Ways to further describe the project.  We’re going to distribute it virally so you can see it and start to get what this is about.  It’s not a documentary.  We’re making an art film.

Your work deals so much with the relationship between audience and performers.  For Choreography for Audience – Take One, you took away the audience, but by filming the project and making it available, aren’t you ultimately creating a passive audience?

When you’re watching the film, you can’t engage in it.  You are not part of the experience.

No.  But when you’re watching it you’re becoming more of a witness to the experience.  That is what the audience is going to be – witnessing something that was only for insiders.

Where do you see this project going?

This is the first time I’ve ever done something like this.  In the future it will be done more often, so participants can get the knack for it, and get better.  I want to continue to develop the games further and make it a larger scale project that can be performed many, many times.  I’ve created something where the context is different for each game, but the rules are simple.

It sort of sounds more like a game than a performance.

I think so, yeah, but you know the thing that differentiates it is that the goal is aesthetic.  The goal is to create an aesthetic value as a group.

Ultimately I feel that to live in society you have to both compete and cooperate to survive.  That’s something that I want to push further through this project.  The individual delivers themselves for the performance, and the group experience is a reflection on cooperation and competition.  Everything is meant to be constructive.

What are you hoping to say with this piece?

It’s all about the way that people are responding to the world outside themselves.  The body is king.  We are nothing without our bodies.  We don’t actually exist.  I’m asking people to come, be with other people, and use your body as an element of performance.

What advice do you have for people trying to pull the trigger on their own projects?

You have to really believe in your idea.  I mean really, truly believe.  I think that commitment is something everyone around you receives subliminally.  You have to feel like you have no other choice, but to do it.