(Image: The Rape of Persephone, Greek fresco from Macedonian tomb circa 400 B.C., Museum of the Royal Tombs of Aigai)

Draft Outline for an Opera Libretto in Three Acts

PERSEPHONE, daughter of DEMETER and ZEUS, Goddess of Spring

DEMETER, Goddess of the Earth, Harvest, and Fertility, mother of PERSEPHONE, sister of ZEUS and HADES

ZEUS, God of the Sky and the Thunder, Ruler of the Gods, father of PERSEPHONE, brother of DEMETER and HADES

HADES, God of the Dead, brother of DEMETER and ZEUS, uncle of PERSEPHONE

HELIOS, God of the Sun

NARCISSUS, a young man who has been turned into a flower

CERBERUS, three-headed dog and Guardian of the Underworld PERSEPHONE and her three friends, the NYMPHS, are playing in the meadow. Tired from their play, they lie down to doze in the caressing warmth of HELIOS, the Sun. But PERSEPHONE feels too hot. HELIOS' caresses annoy her. Seeing a pond in the distance, she wants to go splash herself with water. The NYMPHS try to stop her, saying that her mother, DEMETER, has warned them not to let her out of their sight, but she dismisses their fears and sets off by herself. The NYMPHS shrug, too sleepy and warm in HELIOS's embrace to follow. They fall asleep.

Arriving at the pond, PERSEPHONE finds NARCISSUS, a beautiful flower, growing on the bank. Excited by his beauty, PERSEPHONE gazes at his reflection in the water and sees her own. She sees that she too is beautiful, and sees how beautiful they are together. She reaches out to touch the water and the two reflections, his and hers intertwined, reach up to touch her.

Meanwhile, HADES has noticed lovely PERSEPHONE in the meadow. He comes to his brother ZEUS, complaining about the hard, dark, and gloomy work he does in the Underworld. He says he is lonely, shy, tired of being around the dead all the time, not gifted with women. He asks his worldly, sexually confident brother to help him out. He points out PERSEPHONE gazing into the pond, and says he likes the way she looks, her youth, her warmth, her sunniness. He asks ZEUS to help him get her for his bride. ZEUS reminds HADES that she is their sister DEMETER’s daughter, who surely will not want her to be taken to live in the gloom of the Underworld. HADES reminds ZEUS of the indispensable work he does, clearing the souls of the dead away from the Overworld, guarding them when they try to escape, keeping them far from the living. He says he doesn’t ask for favors very often, despite the fact that he has the worst job of all the gods. ZEUS agrees with all that HADES says. He tells HADES that the best way to get PERSEPHONE is to take her by force, otherwise she would never agree to go. He urges HADES to act quickly while she is unattended. THE RAPE OF PERSEPHONE

PERSEPHONE’s discovery of NARCISSUS resumes as if in a dream or slow motion, interrupted by a sudden shaking of the earth, which opens up in front of PERSEPHONE. NARCISSUS disappears along with the water of the pond which pours down into the dark chasm. PERSEPHONE reaches for NARCISSUS, and falls. Out of the darkness, HADES rises up and grabs her, forces his lips on hers. She screams. The three NYMPHS, startled from sleep, come running, just in time to see HADES and PERSEPHONE disappear into the chasm.

DEMETER hears the echo of the screams of her daughter and runs toward the sound, but it is too late. The earth has closed back up, and there is no trace of PERSEPHONE. The pond is dry and NARCISSUS lies broken. DEMETER demands to know what happened, but the NYMPHS have become mute in terror—they can make sounds but no words. DEMETER curses them for allowing PERSEPHONE to come to harm, and they are transformed into the SIRENS: women with the bodies of birds who sing haunting wordless songs that entice men to their doom. They scatter, shrieking, as DEMETER keens in mourning for her lost daughter.

In the darkness, among the souls of THE DEAD, PERSEPHONE trembles. Where am I, she asks. Am I dead? No, says HADES, you are not dead. I have brought you here to be my wife. He presses his body against hers. PERSEPHONE cries out. HADES tries to be gentle, offering her sweets and cold drinks, but she is repulsed by him and his domain. She refuses all food, saying it must be poisoned, dead food. She tries to escape, but HADES overpowers her. He sets CERBERUS, the three-headed dog, to guard PERSEPHONE. She weeps, calling for her mother. Simultaneously, and overlapping the scene in the Underworld, DEMETER searches for her daughter in the Overworld. She calls for PERSEPHONE ten times, representing the ten days and nights she searched, bearing torches to illuminate all the dark places, and to shine brightly in case PERSEPHONE might see her.

Finally, DEMETER begs HELIOS, the Sun God, who sees everything, to tell her what happened to her daughter. Breaking his rule of silence, all-seeing HELIOS tells her that HADES rose up from the Underworld and snatched her away to be his bride. DEMETER says she will go to the Underworld and bring her daughter back. HELIOS says there is nothing to be done, because ZEUS agreed to the abduction. DEMETER curses ZEUS,  HADES and HELIOS for their conspiracy, and all men for their rape and abuse of women. She vows to make the earth and all life upon it suffer. HELIOS covers his face in shame.

DEMETER mourns. She causes the earth to become dark, dull, dry, and cold. The trees and flowers die and the crops fail. Human beings can no longer grow food and famine overtakes the earth; people and animals are dying of thirst and hunger and exposure to the cold winds as they huddle around fires to try to stay warm. ZEUS comes to DEMETER where she sits, on a rock, immoveable, stony faced. All his overtures are met with silence, until he finally agrees to allow PERSEPHONE to return to the Overworld. DEMETER promises to restore fertility to the earth once her daughter is safe in her arms. 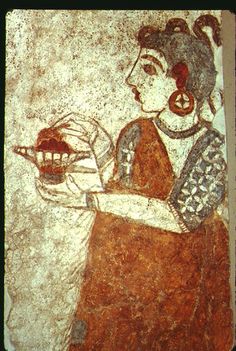 HADES has learned that ZEUS has changed his mind. He goes to PERSEPHONE, who is in a state of confusion and depression. She has been on a hunger strike. She doesn’t know, or want to believe, where she is, hoping that she will wake up one day and it will all have been a dream.  She alternately clings to and is disgusted by HADES. He tells her that her luck has changed and he has decided that she is free to go. He gently helps her to tidy herself up, to wash her face, straighten her clothes and hair. He offers her food and drink, and she, in her hopefulness and happiness, allows herself to be tempted by the ruby-like seeds of the pomegranate. She eats six seeds. As soon as she has eaten them, HADES smiles, for he knows that anyone who eats the food of the dead is condemned to stay below.

Escorted by CERBERUS and the spirits of THE DEAD, PERSEPHONE journeys through the Underworld, across the River Styx, and upward into the light, where she falls into DEMETER’s arms. At their joyful reunion the world springs once again to life 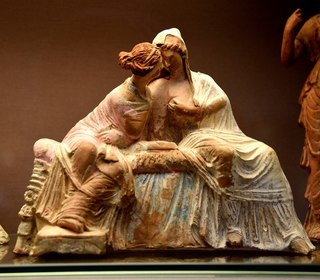 DEMETER questions PERSEPHONE about her time in the Underworld. When she asks whether PERSEPHONE ate anything while she was there, PERSEPHONE at first denies it, but then admits that she did eat a few little pomegranate seeds. DEMETER falls silent. A chill descends upon the earth and between mother and daughter, and PERSEPHONE realizes what she has done.

HADES arrives to claim PERSEPHONE. He tells DEMETER, that as she well knows, since PERSEPHONE ate the food of the dead, she must return with him to the Underworld. DEMETER calls on ZEUS. She threatens to cause the destruction of the earth and all life upon it with unrelenting, barren winter. HADES, for his part, threatens to close the gates of the Underworld and not allow any more dead to enter. ZEUS is faced with either the utter loss of humankind or a glut of dead souls wandering the earth. He proposes a compromise. PERSEPHONE will spend one month in the Underworld for each of the six pomegranate seeds that she has eaten. The other six months of the year, she will be free to spend in the Overworld with her mother. DEMETER is compelled to agree, but swears she will not allow anything to grow for those six months each year that her daughter is apart from her.

PERSEPHONE, coming into a reluctant maturity, realizes that she has lost her one chance to have her former, carefree life restored. Her youthful openness gives way to a grim acceptance. HADES leads PERSEPHONE back to the Underworld to become the Queen of the Dead. A coldness enters her soul, as a cold wind once again overtakes the earth. HELIOS covers his face, and darkness descends. ZEUS returns to Olympus, and DEMETER remains alone on her rock, gazing out over the darkened horizon.

DEMETER sends the SIRENS out over the ocean to take revenge on men by luring them to their doom. This is a draft for an opera libretto by Judith Barnes, all rights reserved copyright 2018