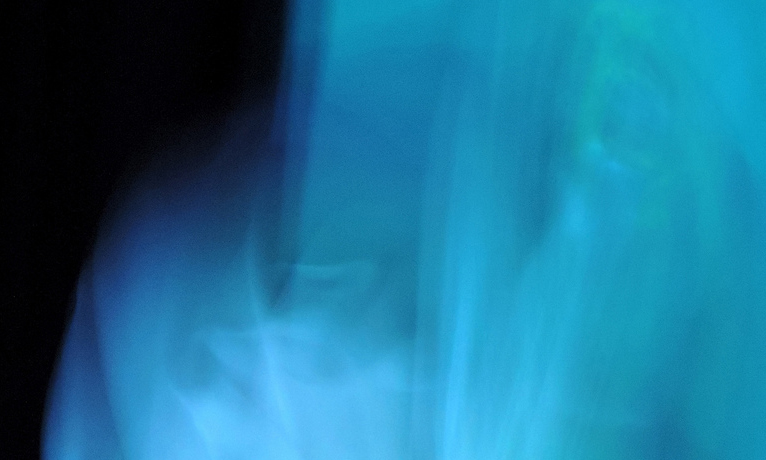 Ok so this is GARBAGE WORLD 5 (lite)! The advert gives a good sense of some of GW's past themes: there sits, among neon confetti, a hoagie full of processed meat and cheese, partially wrapped in tin foil. I attended Garbage World 2 or maybe 3 in Chicago, where the thing was born and raised, lovingly curated by Gertie Garbage (Eileen Lilian Doyle). Gertie now lives in Philadelphia and is keeping the trash-fire burning with number five, the first east coast edition. The GW I had experienced was an all-night warehousefest with many different things going on at once throughout the space's rooms. The place was a glorious, hazardous mess. Gertie Garbage's bio explains that she "began Garbage World from the urge to see artists perform in a situation with more allowances than limitations." My sense of this iteration's “(lite)” is that 1.) there was a well-defined and smaller number of performances on the bill (four live plus one video) and 2.) it was presented in a well-defined space, Vox Populi in Center City, where it was pretty clear that no one was to dump anything on the floor without picking it up in a timely fashion. Tetanus risk pretty low.

I'm gonna focus here on the performances by Ishtar and A$$PUs+sy. They hit me the hardest, along with the video, but we're here to talk about live body stuff. (Aside though: the video, first up, was some great what-devious-hand-moves-behind-these-rituals-if-both-the-practitioners-behead-their-own-selves-type-stuff. It's spell set the stage well. Adam Rose, the body in the video, was a strongly felt presence throughout the night--he also made the stellar score for Ishtar's piece.) As we waited for Ishtar to begin his performance, "Temple of Flesh", the lights in the room went out, and black lights came on, transforming the space. Ishtar emerged in a costume of shrouds, with white lace covering his face, luminous. The layers came gradually off, leaving him with mossy webbing from waist to ankles. Ishtar's movements were obscure, but always deeply grounded. They began far from the surface, resonating on out. I can't remember the sequence, as it felt to me less like a progression and more like entering into a hypnotic state visited by different invoked presences: tongue-lapped indulgence, convulsive fear, self-flagellation, seduction, debauched submission, intimidation, finally converging into a composed meditative stance accompanied by steady vocalized tones (his own, not recorded). The experience was of being ushered into Ishtar's realm of influence—Ishtar, the Babylonian goddess of sex, war, and death. We became witness to his important work of subtle influence, enacted through his body, from his realm to this one. A$$PUs+sy showed her video piece, entitled "Porn Again". The video is layered and complex, sequencing clips of various length, in and around the world of sex and screens. There are bits from porn videos, and, the audience comes to realize, bits that feature A$$PUs+sy herself in sexual situations, either physically with other people or somehow connecting across camera and screen. The footage is pretty much always obscured in some way, often just visible in one hazy spot that fades quickly into a screen of black or of digital abstraction. Images become completely pixellated or distorted by kaleidoscopic mirrors. There was a sustained feeling of menace and darkness as I struggled to catch a glimpse. This, coupled with an impressive industrial score by the sound artist La Spacer, played loud, made for a high level of anxiety throughout. The video is well-made and well-put together, with edits and manipulations that create the feeling of being led by a knowing hand through branching, twisting tunnels, further and further into some hidden interior. Toward the last bit, A$$PUs+sy broke the safety of screens' abstraction by walking out onto the stage. She sat down in front of a laptop wearing only a harness and high heels and went about methodically preparing a hormone shot. A$$PUs+sy is transsexual and administers these shots weekly. From a description of the piece on Garbage World's tumblr: "What you see are documents of a body in constant t r a n s i t i o n". The transitions were strong--from unidentified sexual actions, to the reoccurrence of a character among these actions, to that character revealing herself to be the real live artist. In this act of emergence, A$$PUs+sy dropped the screen of character. What we were seeing, were sharing a room with, was not a character from a film, but a living person tending to her real life. Even sitting onstage, she was partially obscured until rising to give herself the shot. As I can recall, this was the only sustained view of an entire body in the piece. The music continued with intensity, but the film changed to a shot of green, rolling hills and fields. A$$PUs+sy stood calmly among this scene for a few moments, and then the piece ended.

After the show, Hernandez commented that it could have been called "Garbage World 5: Body Issues." It was a gracious joke, lightening the mood, but it was clear that he and the other performers were, to the contrary, among ones in the room who maintained a good working relationship with their bodies. The work was powerful in part because the people on stage had clearly put in some serious time and energy wrestling with the conditions of their own lives. Garbage World had grown up, had spent time in the desert of self-examination. Part of the GW description above, about “more allowances than limitations,” strikes me as particularly relevant. This is an issue of freedom. Of the performances I had seen years ago, many asserted their freedom by refusing to accept any outward restrictions, directly rejecting definitions. Inhabiting Garbage World meant no rules, letting loose. In this one, the fact that “everything is allowed” instead necessitated the personal responsibility for each participant to make her/his own way. Without reliable concepts and values, it becomes a matter of each particular life, each particular body, and what meaning, if any, is in there. This is the acceptance of the limitation of death. Here, to assert freedom requires undertaking the task of self-discovery to the point of becoming able to wield oneself skillfully. This seems to be the difference between conceptual freedom and the lived freedom of particularity. The latter mode has a fair amount to do with what is considered queer performance, and could be seen in the way that each piece challenged sex and gender norms by not addressing them directly--here, these concepts are not to be argued against, as doing so would treat categories like 'male' and 'female' as designations capable of holding specific personal content--that could accurately tell a person about a person, as opposed telling a person about a category. Clearly, each performer had an understanding of such categories that would be considered transgressive, but their work was not aimed at establishing a static stance with respect to them. Rather, it was aimed at discovering what it is that each performer is, and in Garbage World (and elsewhere) this content is made up of the endless particularities that converge in one timeline of ever-transforming flesh and interiority. To refuse to hold such conceptual issues as central clears the way for a kind of open exploration, a way to allow for the perception of how things stand on their own terms. As no stable identity is accepted as the One True Thing, this exploration can be done, for example, through adopting a character such as Ishtar, or through playing roles of sexual objectification for others as with A$$PUs+sy. It's maybe a way of finding oneself through trying things and seeing what happens--the trial and error that constantly registers feedback from an environment and its elements. Such a way takes the world seriously, whereas ol' stubborn Concepts tend to ignore the lived environment, stamping clean abstraction onto a moving mess. And incredibly, although personal and particular, each performance was presented in such a way as to extend a possibility outside of itself, to the audience. By opening up an interiority and doing so with a craft and attention that draws the audience in as well, each stood as proof that one can examine oneself and actually find something. Better yet, one can find something apart from what everyone else says is in there. The performers' internal world is a metaphor for our own: If this is going on inside them, what might be going on inside us?