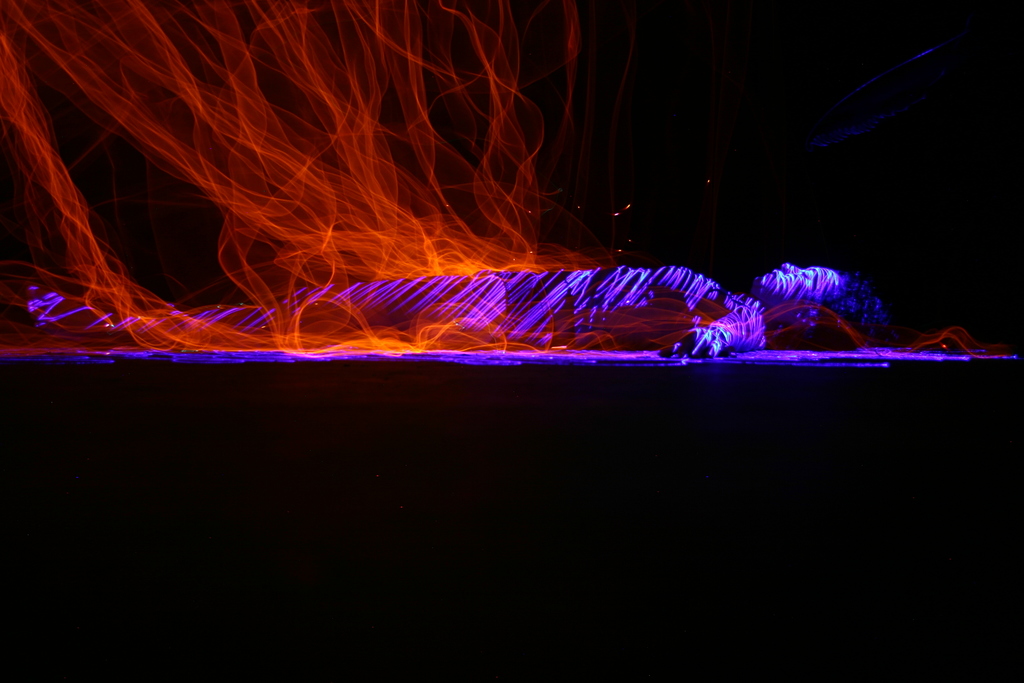 I sat in on the Night Bears' three day residence at the Red Room, part of Horse Trade Theater.  Over this period, we discussed machines, bodies, and ate Indian food.  In an attempt to document this process, Sophia and I decided to link photos and words in a heady format that can give you a feel for the moments and development of Meat and Light.  Per Sophie's instructions, Meat is Physical, Light is Spiritual, Sophia is Emotional, and Raul is Intellectual.

"They must have brought me here when I was Meat."

First of all wariness.  Ever the skeptic in relation to the documentation of performances, I felt that this was a photograph of a photograph, not of the performance itself.

Yet sometimes while traversing the mediums, it serves one well to release a bit of idealism, a bit of humanity evaporates in the best of circumstances, uploaded, chewed up, re invigorated. 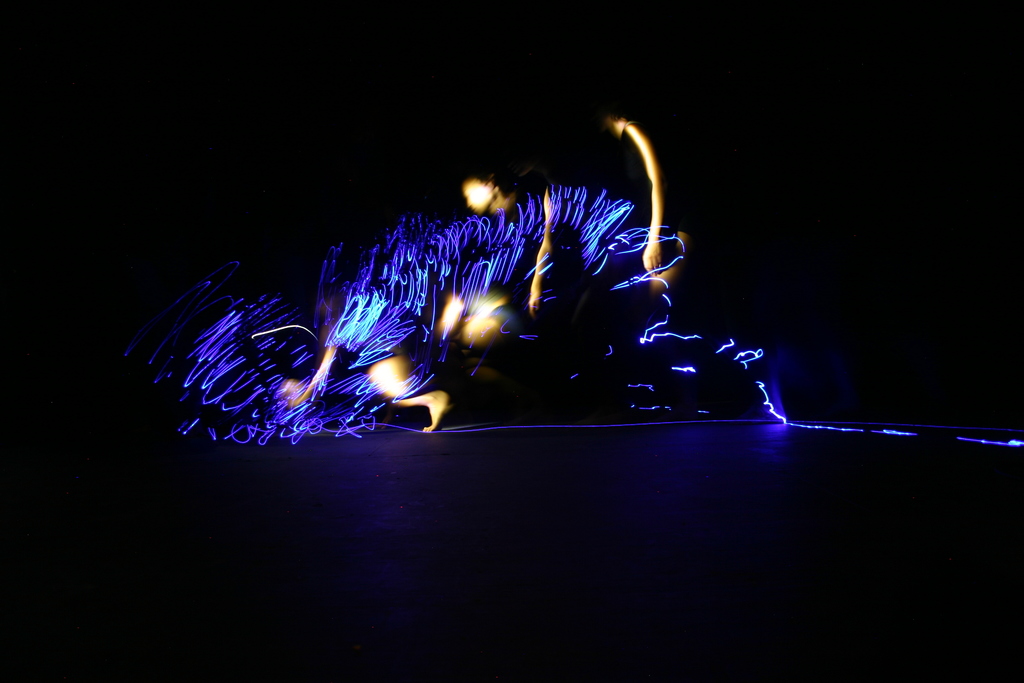 "I am willing to let any alien being invade my body."

What Can We Do

To Prepare Our Selves

We Need to Devolve

And it really begs the question of action painting and traces.  Considering the futuristic scope of the Night Bears, perhaps the mere traces of being are more important than their making.  As if to say that the Night Bears are archeologists in the future looking back on 2012 with nostalgic eyes, scanning the remnants of distant times.  Maybe this is performative archeology. The Scientist Enters My World

And this photo never took place.  This is the first time that it has reached a pair of eyes.  No one but the eyes of the camera lens caught that phallic exchange of lime-green energies.

It is said that there are conceptual beings that can sense the fourth dimension the same way we can sense a piece of toast with butter on it.  Everything at once, the train on every part of the track. 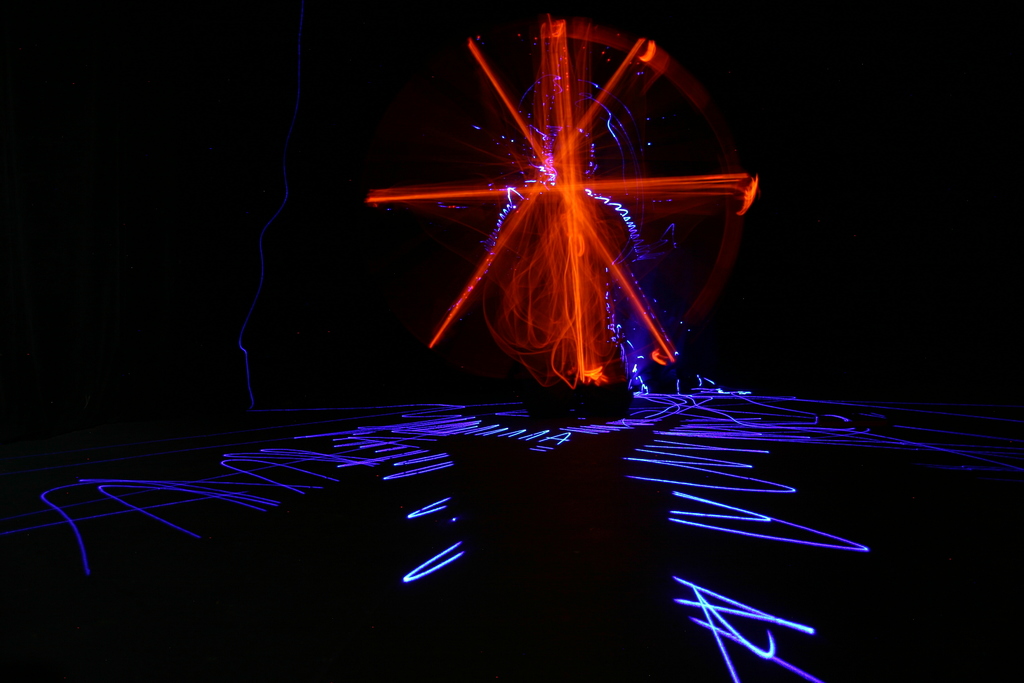 As We Build Our Empire

We discussed, at a certain point, the role of the Dan illuminating Sophia on the stage.  Should this person merely flail a laser wire around her body or should his movements be more orchestrated, precise, and present.  Ultimately, while discussing with John, another member of the Night Bears, we came to the conclusion that the technicians of the piece are also performers, that the line between tech person and performer should be removed and performative tech generated.

And Charlie Chaplin warned about machine men with machine hearts. Yet, as we are nearing the ability to emulate consciousness, the role of the one who uploads us is still unclear and unexplored.  Who will be the new machine men?  Will they be underpaid, overworked staff who merely scan us and send us on our way or will they be men and women in white lab coats building virtual empires, masterminds building their cyber-utopias, providing escape and a new level of demented Social Darwinism? "Instead of thinking of it capturing my image, letting it enter inside me, taking snapshots of my interior, projecting those images which my cells can then enter inside."

During the residency, John would refer to Sophia as meat. John, the ever masterful mind behind the lights and videos would place Sophia wherever was most convenient.  Images such as the one above inspired the residency at the Red Room, trying to make the traces present, light waves instant, presence delegated.

And what better gift to give than to provide a viewer with the vision of the conceptual fourth-dimension sensing beings?  If the amalgamation of movement traces can be transcribed directly to a video wall, where will individual gestures remain, what of fluidity? what of physical presence? 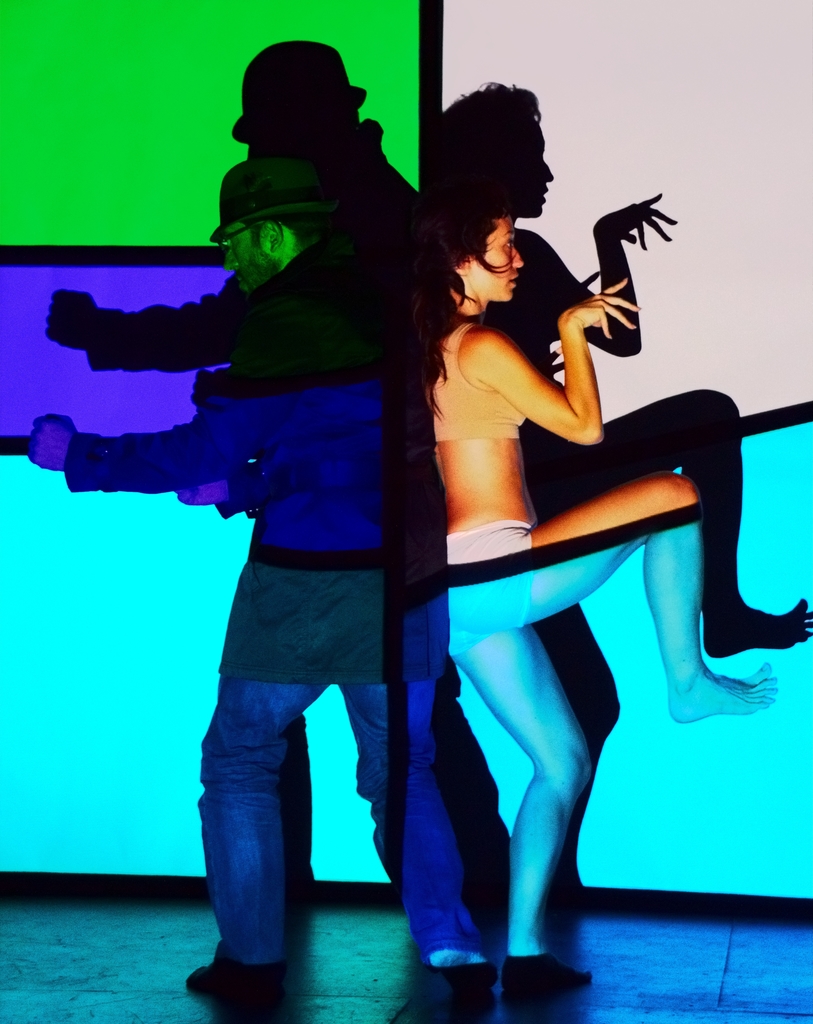 "I decided that the only way to go was willingly. So I let the Nanobots invade my Meat."

He Sees Her Through the Glass

Against the manga themed backdrop, John and Sophia act out a transitional act, the detective and Meat facing off against their coming nanobots.  Yet, Meat is already poised to become taken by her captors, ready for becoming a virtual being.

Of all the great journeys, searching out the Vacation Beaches, finding Jacuzzi Wastelands, heading West, crossing Siberia, what greater, more exciting adventure than traversing circuits and nerve endings.  To voyage through the conscience of your closest comrades, to empathize like you never have before. "But what they didn't know was that I had been preparing for this all along. I have been tenderizing my Meat, so to speak, marinating in light and releasing into the invasion.

So when the time came for me to get scanned into the system,  I went in. But all they got was Meat."

Swirling Occupation of Physical Self

They Take Her In

Tenderizing wants to be the good word here, preparing for upload, stocking mental supplies, capturing the best image of self before going out on the Greatest Journey, into the abyss of digitized conscience, of ones and twos, forever leaving the body for those aforementioned demented utopias.  Where will the ones left behind remain?  Where are the subterranean slums, the counter tops with faces missing limbs? "It started to spread itself all over my Meat. Penetrating every part of me. I could feel every movement, every breath of contact as if it were the only thing that existed. There was complete awareness and it overtook me in a wave of intense physical elevation."

The Engineer Knows the Code

A Flash of Meat

The images projected in the residency lacked faces.  Anticipation and presence were strong throughout.  It is clear that this was not a problem of absence. Rather, it was a question of how the Night Bears' minds multiplied and bounced off of the walls in new, alien forms.  A vortex of light has traces.  Though the photo above leaves one to believe that all humanity is removed from Meat, I would go as far as saying that her humanity has merely shifted.  The more relevant question is whether humanity is founded in our Meat bodies or our circuit minds? More interestingly, how will our essence be lifted into the cloud city, how will it be melded, how will we relate if bodies become a thing of the past? 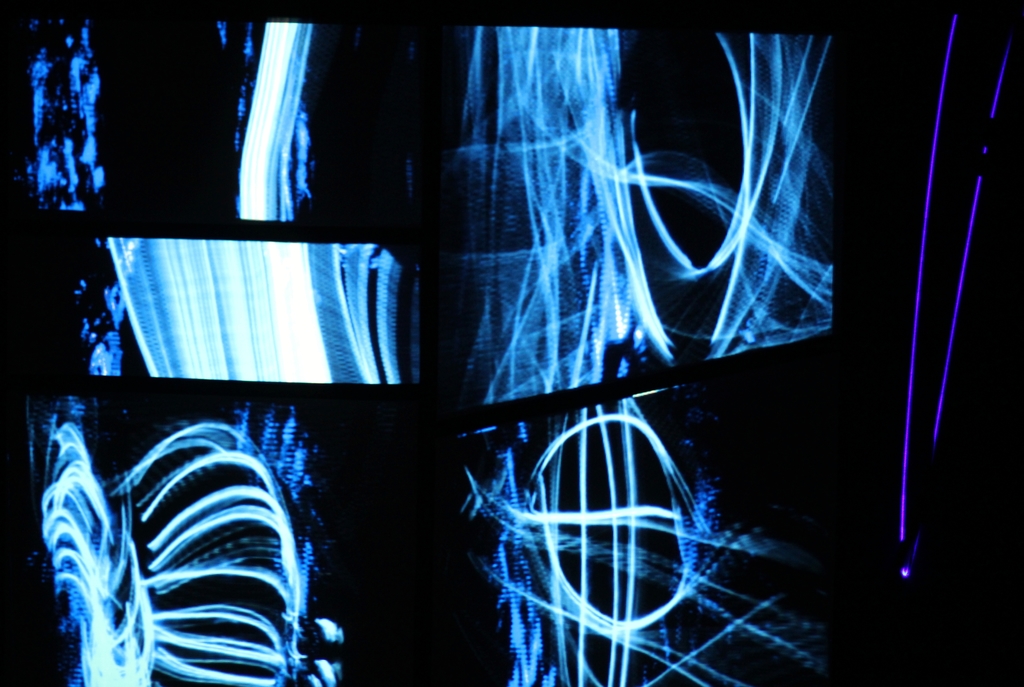 "So I let it have my Meat. Finally and completely, I gave that part of me to the Machine. And it took me. We sent off swirling and screaming into the ether. We released our human-machine bodies into another plane of existence."

How To Tell When

There is No Difference

Really, the residency was about finding connections between traces of Meat's essence and its nontemporal representation on the manga screen.  We have hints of her scattering hair and chin, sometimes the undulations of her face crossed over by rays of light.  Real time transposition to a screen, necessary shift of conscience. 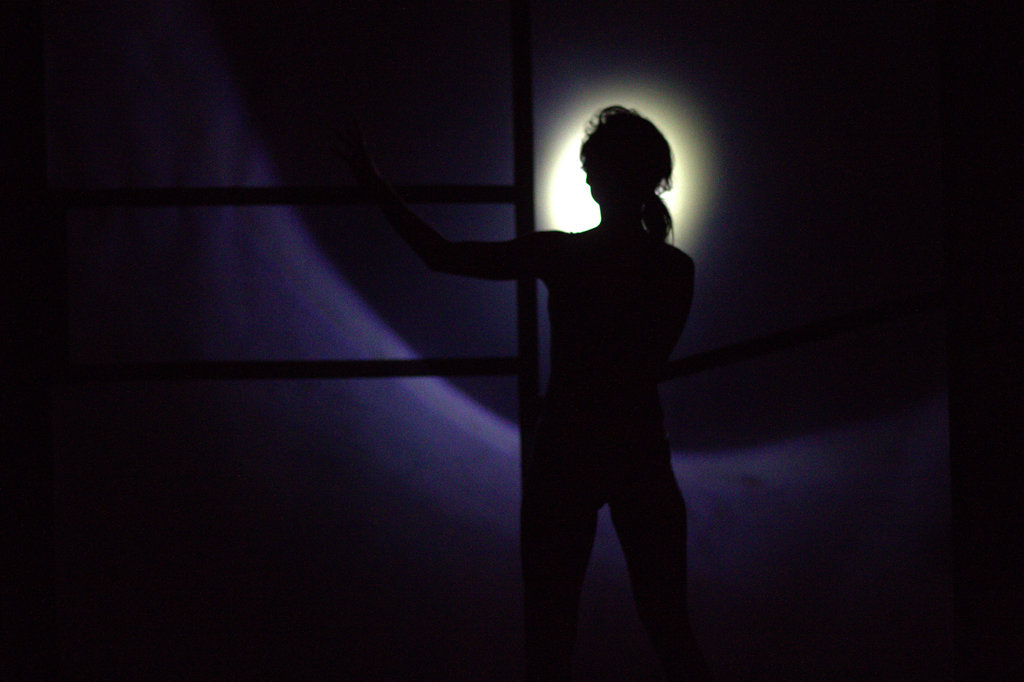 "Meat is made of cells, and cells are made of molecules, and molecules are Machines. So I let the Meat into the Meat and became Light."

In Ways We Do Not Yet Understand

Perhaps We Never Will

Perhaps it is Not for Us to Understand

We Need to Keep Doing

The eerie conclusion to the piece took the form of Meat's now empty body floating off the stage, a pale yellow backlight forming her silhouette.  Becoming Light consists of sending off all essence into the cloud, into hard drives and optical drives, the body remaining just a roaming cadaver, made obsolete by new options in cyberspace.  Is this just a new strain of Romanticism?  How should one begin to work out and prepare for the coming Singularity?  Will there be gyms? Is it the role of the artist to go on and make the first incisions concerning this new state of being? Probably as the planet is running out, we can continue this human condition in digital files and cloud computing.  Probably we will expand and expand and expand the way we have been for centuries, though this time it will be virtual and not physical.