Benjamin Norman
At the Kitchen a couple of weeks ago, Jennifer Monson showed us that her body of work continues to pursue a rigorous investigation into dance. After seeing the performance of Monson’s Live Dancing Archive at the Kitchen, I began to come to better grips with the power of dance and how that shapes the performer’s (and in turn audience’s) understanding of the world around them. But why is preoccupation with experience and documentation so important? In a discipline where the boundaries between object and subject, who is looking at whom, and who is feeling what? What is the purpose of understanding the world we live in through performance and why is it so effective?
Monson undertakes this challenge head on alongside Jeff Kolar’s hypnotic score and Joe Levasseur’s subtle light design, creating a fluid and organic dialogue onstage. Witnessing this, the audience is invited not merely to see—but to feel and understand the performers’ relationship to their environment.
Beginning in pitch-black darkness, we eagerly awaited for the stage to awaken. As Monson and Levasseur light a globe against the back wall, the room plunged into stillness as Monson began to exercise her relationship with the space—moving gently to the exterior forces of light and sounds. Slowly but surely, Monson and the light dance together, weaving in and out of negative and positive space. It is almost as if they had partnered together for a lifetime. You read on Monson’s face that her improvisation moves at this pace for a reason. To allow for that magical chance encounter: not between two objects, but a harmonious fusion between the light’s waves and her body. 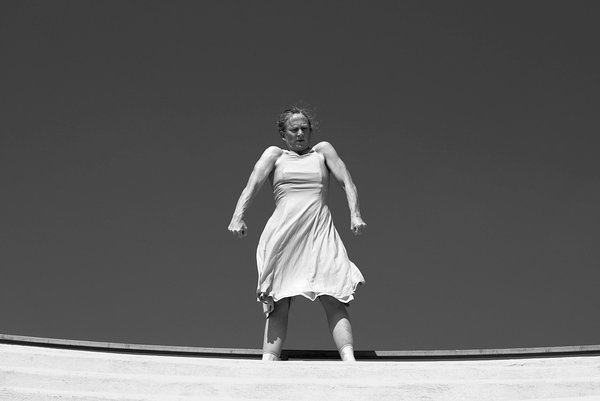 Valerie Oliveiro still from auxiliary installation at the Kitchen
Scantily clad in white fishnets and a fur vest, it feels as though there is nothing between Monson and the audience. This sense of vulnerability does nothing but allow for the audience to come to better understand the beautiful development of Monson’s improvisation before them. The performance gradually escalates into its climax: a feedback laden full-fledged metamorphosis
where lip-synced lyrics and violent slides pierce the space. The audience is struck in awe by the rigorousness of this once timid form, but is reassured by the glint of determination and strength in Monson’s eye.
In a recent interview with the Kitchen’s Director and Chief Curator Tim Griffin, I read and was convinced that performance art and dance’s more recent rise to acclaim was within a greater understanding of “the real significance of the experience economy”(1). This has become increasingly apparent within institutions across the country as we witness these forms migrate from our peripheral vision to centre-stage: “During the industrial period people were prepared through the lens of their everyday lives to look at objects. Objects were a source of value and being produced on a scale never before encountered. Now there’s more of an intangible economy or service based economy. So, it would be natural that those similar corollary ways of viewing would be put on display.”(2)
What you see in Live Dancing Archive is this display right before you. Monson’s face contorts as she herself undergoes a kinetic exploration of the world around her. Her body is in fact capable, as is ours, of archiving multiple scales of experience. As I sit here and reflect on this performance, I am undergoing an archiving of what I thought of Monson’s movements, what I thought others around me felt, what I felt, what I felt that the performers felt. This complex system of seeing, being seen perceiving what other people see only emphasizing the pertinence of such an absurd concept as an ‘experience economy’.
Griffin is isolating a monumental shift. We as audiences, citizens as well as subjects are shifting our focus from object to subject—and this phenomena is not just limited to the elitist confines of the Artworld macro system. It is seemingly so that in a wider context, we are redirecting our attention from the material to the immaterial as we yearn for experiential relationships to others, objects and our environment. Disenchanted by pre-existing modes of perception, it has been Modern Art’s foremost occupation to overturn and reconfigure these systems.
And how successful it has been. The Cartesian eye no longer transports us to an objective truth. We instead search for a pluralistic and subjective understanding of the world. In any physical performance, subject is transposed to object and visa versa--but in the case of Monson, it is the very fact that the figure in front of us is human that we force ourselves to reflect on the world around us.
This is of course well aligned with Griffin’s idea of the undeniable emergence of experience economy, as Monson not only shows us the beauty of the human form, but postulates that the body is capable of archiving multiple scales of experience.
(1) Tim Griffin at the Kitchen interviewed by Moriah Evans for Movement Research Performance Journal #41
(2) Ibid.,
Images taken from:
http://www.nytimes.com/2013/02/20/arts/dance/jennifer-monsons-live-...
http://www.nytimes.com/2013/02/10/arts/dance/jennifer-monson-back-t...

wish i could've been there in person...particularly like this: "Monson and the light dance together, weaving in and out of negative and positive space. It is almost as if they had partnered together for a lifetime." thanks for getting me this close; multi-layered & intimate.