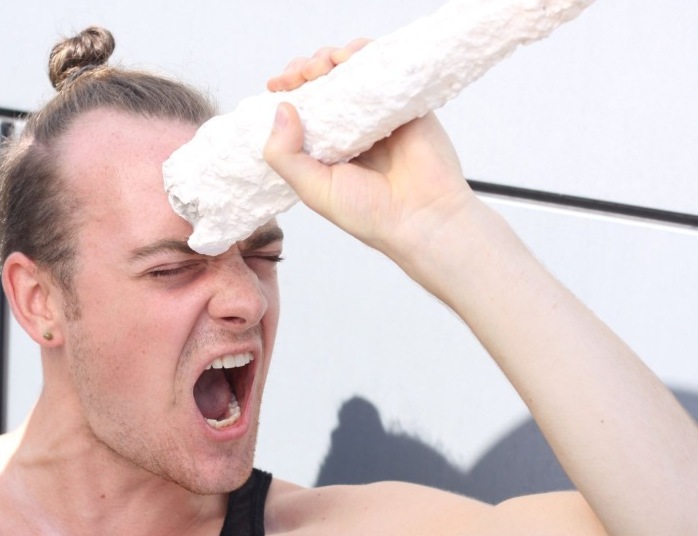 I have found that I am unsatisfied with my artistic endeavors when they are not relevant to the world as it exists now. I do believe that the simple act of creating performance matters, however when it comes to my own work, it must be necessary or I will have no drive to see it through. It is this need and an artistic journey, which led me to the concept of the Embodied Shame Pole, now central to my performance work and a tool to categorize it within the medium of experimental theater.

It began with an exhibition by Lee Ufan at the Guggenheim. Ufan works mainly in painting and sculpture. There is a fascinating performative quality in his work. It is not that his work literally performs, but rather that within it there is evidence of a past performance; evidence of its creation, bound up with chance. A simple sculpture that I find precisely explicates this quality is one entitled Phenomenon (1968) involving a rectangular steel plate placed directly on the museum floor, upon which a glass plate of the same size is placed. Ufan then finds a rather large smooth and ovular shaped rock from nature and from a precise distance drops the rock on the glass pane, creating a bursting web of cracks highlighted by the dark metal sheet below. When viewing this piece in the museum, the spectator is immediately aware of the performance through which the art was created. Yes, one can imagine any painter or sculptor stroking the canvas or chiseling away, however, it is the simplicity, the examination of a single moment in Lee Ufan's work that generates a more precise, more scientific performative quality.

After viewing Ufan's exhibition, I was asked to generate a creative response to his work. What could I create that would expose similar evidence of a past performance? Being the crime drama fanatic I am, I thought instantly of murder. A crime scene could be perceived as a work of art, and evidence of the performance of its creation would be inherent. Now the question arose: who would I like most to murder? Hypothetically, of course. It did not take me long to consolidate my search to CEO's of major oil companies. Through much research on various candidates, I came across Lee Raymond, the CEO of Exxon Mobile during the oil spill in Cordova. I discovered that a totem pole had been created by Mike Webber with the intention of shaming Lee Raymond and his company for the promises they failed to keep in the aftermath of the oil spill (It seemed I wasn't the only one in the business of creative response). This "shame" pole, to be more precise, is an ancient tradition of the native people of Alaska and British Columbia, used as a catalyst for justice, by provoking the energy of change and action within an individual or community via shame for their unpaid debts or unkept promises. It was decided. I would create my own "horizontal" shame pole in the form of a crime scene installation, giving evidence of my subject by smearing his blood into the iconic symbol of his company, that is, the bp spiky sun splash. My first shame pole was for Tony Hayward and his command of bp during the deepwater horizon oil spill.

My obsession with the shame pole deepened when I began researching the real history of the unicorn, which dates back to 398 BCE. What I learned of the unicorn's natural history, felt extraordinarily relevant to humanity's timelessly consistent attempt to control diversity and individuality through acts which commodify, claim, condemn or simply discontinue the other. To create work in regards to this subject was necessary and it was at this junction that I came to the concept of an Embodied Shame Pole. A work rooted in the medium of performance, with the intent of catalyzing a vague shame within the spectators to unite them in an energy of change and empowerment. The Embodied Shame Pole aspires to portray the truth, in which shame is subsequent. I do not see this shame as a negative experience. It is simply a response to a truth that demands to be listened to, to be thought about critically. The objective of the Embodied Shame Pole is to harness the capacity for shame to be a vehicle in the pursuit of change. Unlike the shame pole–aspiring for immediate and direct action to take place in accordance with its will–the Embodied Shame Pole is more concerned with change in a metaphysical sense. It seeks to ascertain a greater sense of knowing or awareness within its spectators. Shame breeds a new arrangement of ideas, it realigns reality for the one experiencing it. By extending a feeling of shame to the audience in regard to the subject, the Embodied Shame Pole is attempting to shift their awareness and their metaphysical relationship to that subject. I am not expecting–nor desire–my work to cause a specific shift in the spectators physical actions following the performance, but rather to plant a seed that causes them to think differently about the subject. I believe this to be a more potent response and one which extends beyond physical action. The Embodied Shame Pole works in beauty, in art, to cull a community and from this united and soft place of enjoyment to extend a call for critical thought.

I think this is a brilliant concept-device that you're enacting. When I was in a Richard Foreman show in NYU-ETW, he said in the middle of one rehearsal (I paraphrase poorly)"I'm tired of seeing theatre all about how we're using this mechanism correctly and heading in the right direction."

I think the experience of shame that you describe is an extremely necessary tool for artists, and I'm afraid it is looking like many of us are progressively losing sight of it, or even disregarding it as a helpful device altogether.

I warrant there are a great many artists who could gain from an aimed-at, shame-based, critical awareness of not only the subjects of their art, but also the art-objects themselves that artists are creating/enacting. I find myself too often walking out of a theatre or a gallery and thinking, "What a shameful image I have just witnessed that should have been about a very important topic."

I think that the Embodied Shame Pole device that you've set-up could be a very good in-roads for grappling with important and pressing topics in society, in history, and in art-making itself. I would love to talk further about this concept in any capacity and ask if I could adopt aspects of it in my own performance-work.