ESSAY//THE DEMATERIALIZATION OF THE ART OBJECT 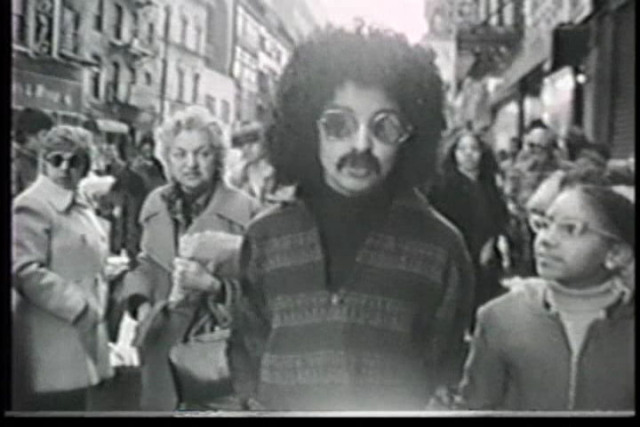 Image of Adrian Piper performing as Mythic Being, Image sourced from WordPress

As Clark began to create objects that could be manipulated she began to change the ways of relating to subjectivity that had been present in concretists ideas of the art object. She transformed the viewer into a participant through creating an encounter with their own somatic bodily being through the use of her art object. In the quote above Clark positions the mediating moment between the subject and the object as the act. This is important when you look at her relationship to both the phenomenological work of Merleau-Ponty and when considered in relation to her work with the psychoanalyst Winnicott, whose theory of the transitional object informed her own work tremendously. From a phenomenological perspective the discovery of the participants body, and therefore somatic subjectivity comes through experience (Harper Pg. 32).
Clark’s art objects offered psychological mirroring for participants, Clark states that “The non-object is not an anti-object but a special object through which a synthesis of sensorial and mental experiences is intended to take place” (Clark via Amor Pg. 35). In a manner similar to the literalist conception the meaning comes through relating to the art object. While in minimalism the art object creates presence of the space and object, Clark’s objects create presence of the participant’s own subjectivity. They give somatic awareness to those who experience it.
Lygia Clark worked with Winnicott’s concept of the transitional object. Winnicott conceptualized human nature as having two parts: internal and external. Like Merleau-Ponty, he thought that it is through experience that the internal and external are bridged. This introduces the need for the transitional object, the object helps the (child) to utilize perception and differentiate between me/not-me. This serves to crystalize the child’s sense of subjectivity. The transitional object as proposed by Winnicott is something life like, something that is held dear by the child. The transitional object becomes an extension of the child’s conceptualization of self until they are able to accurately differentiate between me/not me. This idea of the transitional object was carried into Clark’s work with her objects and their ability to be manipulated. The active perceptive act of differentiation between me/not me creates the sense of subjectivity for the viewer.
Subjectivity is continually generated through experience and the work is dematerialized as the subject and object became unified through the act.  Harper states that “Clark came to believe that subjectivity was nurtured not through strict internal means or by the impression of life exterior to it, but through experience; that which is dependent upon the interior body and exterior life”(Harper Pg. 84).
Adrian Piper
The work of Adrian Piper is situated in the context of a similar paradigm shift within the New York art world in the late 1960s. Artists were being asked to dialogue with changing notions of art and identity, while at the same time emerging forms of conceptual and other formerly marginalized art/artists were seeking legitimatization. Adrian Piper was seeking inclusion, however the inclusion she sought was more nuanced than being included within distinctly “black as other” or “woman as other” marginalization. Piper’s early conceptual work was well received because it was thought to be made by a white male. A position of neutrality was assumed within the work, and this neutral position was associated with the white male artist. In order to create work that was recognized and valued of its own accord (as an autonomous art object) the supposition of a “neutral creator” was necessary. At the time this neutral creator was the white male. Piper struggled with being marginalized and relegated to contexts that were “distinctly other”. While she didn't want to negate her race or gender, she also didn’t want her own identity to completely consume the identity of the work she was creating.
It was through navigating this tension, both within changing gallery conventions and within the context of identity politics, that Adrian Piper moved into performance. In moving from conceptualism to performance art she sought to eliminate her subjectivity through creating an art object of her bodily being. In Embodied Avatars Uri McMillan describes Piper’s work as “a bodily and psychological experiment in transcending the boundaries between subjecthood and objecthood”(McMillan Pg. 101). Conceptualism gave Piper the opportunity to explore the possibility that freedom could be granted through abstraction (McMillan Pg. 102). Piper wanted freedom from her own subjectivity. She sought to achieve this through creating a more concrete objectification of herself. The performances discussed by McMillan, and the performances utilized in this discussion, are performances that were simple acts of assuming character and disguise. Rather then a recognizable space to be created and given to an audience, what Piper created through these performances was a change in her own consciousness and conscious attitudes towards herself.
These performances were written about and extensively theorized by Piper. Through this work of conceptualizing herself she was able to create a dual consciousness, similar to that present in Authentic Movement, that made framing the work—and herself inside of it—possible. Piper is quoted as saying:

I have assimilated an “other” into my sense of self, which is that reflective perceiver consciousness. I perform, and simultaneously perceive myself as performing object… But if this is so, and if I am able to be reflective about my actions in the manner of a perceiver, then of what value is an external audience?… One Sunday evening I was doing the Aretha Franklin piece in the deserted trucking district, and I found myself to be entirely self-conscious of my actions, even while being fully involved in performing them. My perceiver consciousness expanded to fill the immediate spatiotemporal environment, even though there was no external audience. The more I substituted solitary environments, the more I was able to permeate those environments with my perceiver’s self-consciousness of me as acting object (Piper via McMillan Pg. 122).

This dual consciousness is what creates for Piper the experience of being an “art-object”. While she has not removed her subjectivity from her consciousness (the internal witness could be said to be her unique subjectivity examining the moment), she is able to find a state of witnessing herself that makes it possible for her to recognize the art object within her being. In her work with the Mythic Being Piper sought to push this notion of wholeness (wholeness implied in simultaneously existing as artist/art, subject/object, witness/witnessed) and containment deeper through becoming the space where the object is held as well through becoming “the arena”, as she herself describes it. The move towards seeking to become the container acted to separate an aspect of her consciousness from her “being”. Through seeking to become “the arena” she was seeking an entire change in consciousness. She gave the art object a consciousness that was not her own.
Piper’s work is that of a psychological and creative self objectification. Piper is exploring selfhood through removing her self. In Piper’s conceptual work she sought to remove herself as the hand, with performance work she continues this thread, but using her own body and identity. The contrast between conceptual art and performance is dramatic and Piper is trying to apply the same distance utilized in conceptual art to embodied being. She is creating a relationship between subject/objecthood that exists within one bodily being. Through creating a perceiving consciousness that is expected to mediate between subject and object Piper is taking the artistic considerations of the time and applying them to her bodily being.
Comparison
In Restoring Subjectivity and Brazilian Identity: Lygia Clark’s Therapeutic Practice Harper utilizes the idea of the apparatus to explain the creation of subjectivity in Clark’s work. She describes how the apparatus—conceived via Foucault and realized through Agamben’s theorizing—is the mediator between the being and an external power. The apparatus, such as a body, mediates this previously discussed me/not me territory and through this mediation creates an awareness of subjectivity. Clark’s objects represent an apparatus, they create subjectivity and a somatic experience.
When you apply this idea of the apparatus to Piper, her own positionally becomes the apparatus between subjecthood and objecthood. She is performing her positionally more then she is performing her subjecthood, as well as exploring other positionalities through the use of performance. Her subjectivity as a reflection of identity signifiers is separate from her perceptive subjectivity. Through becoming the object she is objectifying her position so her subjectivity can be transformed.
Both Piper and Clark are working to dematerialize the art object by creating a performative object through the use of perception. Piper offers a more direct example of the performative art object through the use of her own bodily being. She is using objecthood to create self transformation. On page 137 of Postdramatic Theatre Hans-Thies Lehmann is describing “aesthetic behavior” and self transformation through the use of performance and he states that  “if one’s own body is thus used not as the subject of action but at the same time as its object, as signifying material, then this procedure annuls all aesthetic distance—for the artists themselves as much as for the audience”(Hans-Thies Lehmann Pg. 137).
While Piper is using her own bodily being to create a relationship between perception and objecthood Clark is externalizing this process through the use of objects. Clark is objectifying perception through giving participants a somatic experience.
Dematerialization
Both artists begin with the art object and through the use of perception dematerialize the object. Both artists are repurposing the performative in an effort to re-conceptualize the representative. In discussing the difference between drama and theatre in Postdramatic Theatre Hans-Thies Lehmann states that in drama “the beautiful is conceptualized according to the model of the logical” (Lehmann Pg. 41). Here Lehmann is discussing a Hegelian relationship to theatre and he continues to say that “energetic theatre would be theatre beyond representation—meaning, of course, not simply without representation, but not governed by its logic” (Lehmann Pg. 38).  In the work of Lygia Clark the logic of representation is broken down as subjectivity is incorporated, and direct participatory perception enters into a dynamic relationship with the work.
Adrian Piper redefines the relationship to representation through the use of her positionality. It is through performative representation that she seeks to define her subjecthood. Clark is utilizing perception to create a somatic experience, while Piper is creating an ideological and psychological experience. Both artists begin with the idea of wholeness that is implied in the art object, but while Clark takes this idea and externalizes it, Piper internalizes this relationship.