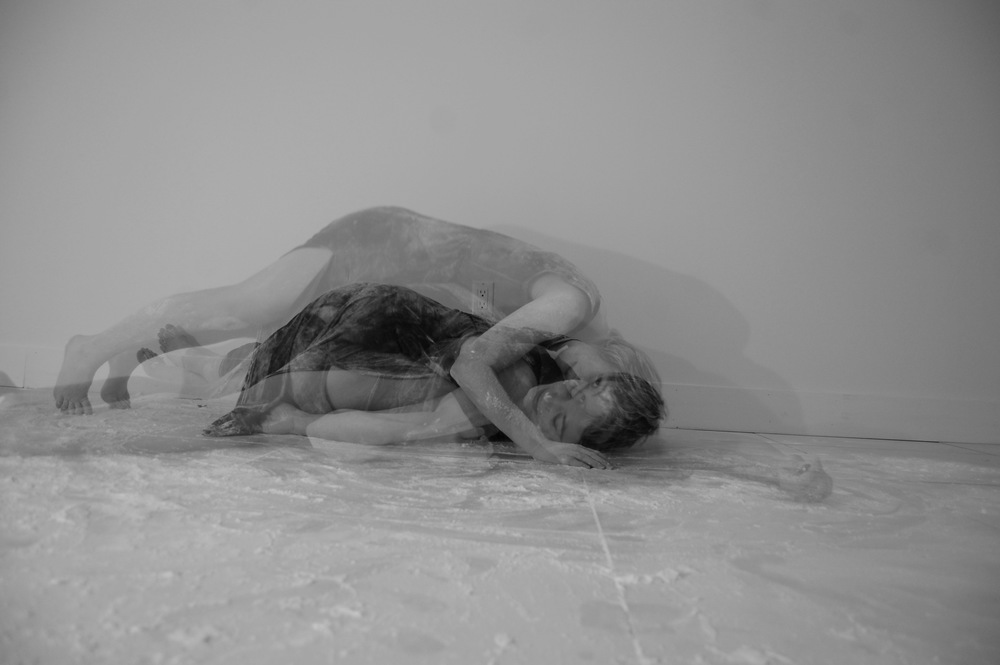 In Process with Authentic Movement

It’s important to let the space remain wordless, at least the center space. The context comes about through reflections, and around the edges. It’s the wordless space of listening. Sound creates context for my movement. When I move to poetry or to my own words I can give my internal experience a direction.
***
Listening is quiet. In each moment time is translated into symbol. Turning, turning, turning, reaching. I can’t reach enough. What is the story of the stretching? Hope, help, fighting, pulling. Lean into it and exhale. Vulnerability with self.
***
Behind me are the ruins of the Mayans, inside of me is the color of their sacrifice. Sometimes memory gets in the way of receptivity. I know I’m supposed to be working with memory, bodily memory is the fuel of so much of this work. But I like the receptivity that comes when I loose my memory completely.
***
Orientation beyond reason. My eyes are closed and I’m forced to orient myself without sight. The music is loud, to loud for grounding. Too loud to help me understand the space. In this space I have to orient myself with faith. I have to trust my witness, I have to trust my body. I’ll know in my body when to move, when to stop, when to catch myself. I always do, it surprises me when my eyes are closed and my hands catch the ground right before I hit it. I am oriented. Being in the presence of a witness helps me to understand this orientation.
***

Brief Description of Authentic Movement Practice
I began Authentic Movement through doing group work with Sherene Schostak, Jungian Analyst and Authentic Movement practitioner. Sherene works with movement in a group setting. In the beginning of the session the members of the group sit in a circle and the collective space is given intention; each mover identifies questions or points of contact through dialogue that they will be working within the space of the dance. After this is finished the members of the group stand in a circle and each move, one by one, in the center of the circle. Each person moves alone in the center of the circle for approximately 3 minutes and each session lasts two hours. After the movement is finished the group reconvenes in the circle and a dialogue is held about each mover.

Witness/Mover Relationship
The relationships within this group can be understood in terms of the witness/mover relationship. The witness (or witnesses) are the individuals that hold space for the mover and provide a container for consciousness. Throughout the session each person will act as both mover and witness at different times. The witness sees the mover in the space of the practice and is able to help the mover bring the unconscious elements that were evoked through the movement into consciousness through dialog, when beginning this type of movement work the movement is very unconscious; the unconscious cracks in the mover’s relationship to the body can be seen in the movement. The witness watches the mover dance, and then through dialogue tells the mover what they witnessed. When in dialogue judgement statements are avoided—the aesthetic value of the movement is less significant then the mover’s own transformation in the space.
In addition, the movement is largely affect driven. While moving—and focusing on a particular affect or intention—images and memories move into the mover’s consciousness. The mover then incorporates these previously unconscious images and affects bodily, and through this they are consciously integrated into the mover’s psyche and subsequently the mover’s conscious relationship to self is transformed (Alder Pg. 35). Through engaging in this process consistently for an extended period of time the mover is able to develop his or her own inner witness. This inner witness deepens the relationship in the mover between their unconscious and conscious relationship to memory and the moving body.
In my own work with Authentic Movement I supplemented group work with an independent practice under advisement of Sherene. Because of this the development of an internalized witness was essential. Internalizing the witness allows the mover to bridge the gap between unconscious experience and conscious self-reflection. The process of developing an inner witness creates a dual consciousness in the mover—when working with the internalized witness it is essential to perceive yourself in the present as a moving body with affect, memory (both kinesthetic and otherwise) and unconscious associations; in addition it is also necessary to find the place of the objective witness that can see the perceptive body and create for it a container.

Self and Symbolism
This dual consciousness creates a relationship between the mover’s consciousness of self and symbolism in which the body acts as a decisive bridge between the two.  The use of the symbolic is important because it allows you to create a sense of subjectivity without concretizing the meaning-making process. Authentic Movement creates space where the relationship is simultaneously conceptualized and embodied.
Authentic Movement, as it is traditionally practiced, relies on active imagination. (McNeely Pg. 28) Active imagination is a Jungian methodology employed as a way of bringing unconscious material to consciousness through visual stream-of-consciousness associations. In Authentic Movement the movers open themselves to this process via the body, they open themselves to symbols of the Self (In Jungian thought the “Self” is the unity of being, or a state of wholeness) which emerge through images and carry material from the personal, collective and transpersonal unconscious. The mover lets these images carry the body through an improvised movement sequence.
In Jungian thought, images are the language of the unconscious. Through bringing these images into an embodied state through dance the symbolic contents of the unconscious can be grounded within the body. (Chodorow Pg. 111) Moving with these images and symbols is a way for unconscious material to be embodied, and this embodiment is a way for the materials of the unconscious to be integrated not just into the psyche, but into the body as well.
In Critical Moves Randy Martin states that, “Dance lies at the point at which reflection and embodiment meet, at which doing and anticipation are intertwined. Dance is, therefore, the acute moment of its conditions, appearing as if with warning but with no prior diagnosis” (Martin, Pg. 1). The conceptual, the reflective and the embodied all co-create the moment of dance. It offers a concrete visual lens that is experienceable in present time through bodily being. Dance—by its very nature—is working with both reflection and embodiment; in Authentic Movement however, this relationship is taken one step deeper as it is internalized—the mover is relating to the other as, “the other in me”, through the use of the symbolic. The “moment of its conditions” that Martin refers to above is seen in this context as a conceptual relationship to the symbolic, as opposed to an externalized relationship to the external or cultural conditions.

Perception
Authentic Movement is one form of somatic dance, in this case the somatic is rooted in bodily perception, it is through perception that embodiment is realized. Perception is the space in which subjectivity and physicality are joined. There is a state of listening implied in the perceptive body. This listening is what makes it possible to understand the relationship in the individual between the self and subjectivity. Perception is a vehicle for understanding the wholeness of embodied being.
In addition, the role of perception in Authentic Movement is significant because it offers a dialectic through which both consciousness and the symbolic can be examined. This dialectic is not dualistic and offers a perceptive frame. The perceptive frame is unique because of the way that perception relates to the temporal—perception relates to being in time present, without disqualifying the past or potentiality.
The perceptive bridge between consciousness and the temporal creates a context capable of holding the symbolic. The symbolic is a manifestation of memory—both personal and collective, or historical. The psychoanalytic frame creates space for the symbolic within the embodied present. When this is taken into the space of dance the perceptive, the symbolic and the temporal are able to commingle in a new way and each of them is changed, individually and in relation to one another.