PROCESS // Notes from Inside the Box 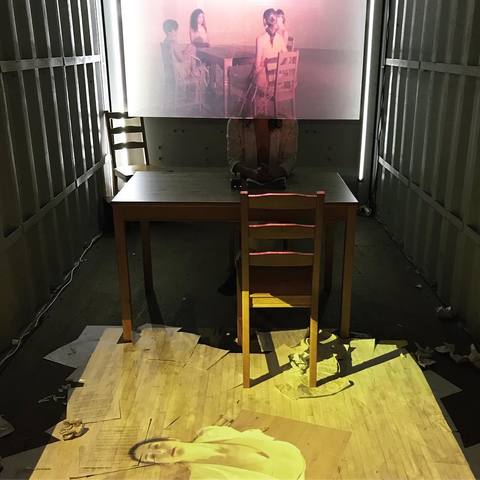 For the past year, I’ve been working on a piece called Glass: a multi-disciplinary dance performance that addresses the concept of a glass ceiling and the myriad ways that women internalize misogyny within patriarchal constructs. The project exists as a standalone film series, a staged dance, and a film and performance installation.

This installation recently toured to the Performance Arcade, a New Zealand festival which puts works of art inside of shipping containers alongside the Wellington Waterfront. The festival saw nearly 70,000 audience members this year. I (the artistic director of this work) performed in this installation alongside collaborator Bre Short, alternating performance shifts during 13 hour festival days.

When people enter our installation, they pass through white curtains into the shipping container and see a film projected downwards onto a floor covered in scattered papers. This film shows movement shot from an overhead perspective. Taped to the walls are stories from the film’s collaborators about their experiences with misogyny; everything from professional insults to micro aggressions to outright abuse. There is a table, where a woman in a white pantsuit is seated. In front of her is a stack of papers and four bottles of nail polish, and a glass pane upon which is projected a film, reflective of the floor projection but with a different perspective. She is framed by a square of cold lighting.

The installation functions on a loop, which includes a solo dance and music pulling sounds from Frank Sinatra, the dancers’ voices and the sounds of nail polish bottles. The rest of the performance centers around a seemingly simple, yet intimate and layered interaction: as performers, we paint the nails of audience members.

I provide this information as context for what follows: a few of my most memorable interactions from inside the box.

There’s a young girl in a bright pink bear suit. She has food on her face freckles. She is absolutely thrilled to have her nails done and chats the entire time, telling me how the last time she painted her nails it was a lavender color, though her favorite colors are blue and magenta and how EXCITED she is that the color we have is such a lovely shade of Essie: With the Band magenta.

She barely watches the film. She reads nothing. She walks away, visibly elated.

A bunch of sugar high loud boys kids come stomping through. They pull the curtain back and look at me through the glass. They don’t come inside, just stare at the scene before them.

After a few giggly moments I move. They all shriek, exclaiming, “it moved!”

A few more kids peek in, apparently amazed that I am, in fact, a real breathing human laughing. I try to ask if they’d like to have their nails done, but again they shriek, exclaiming, “it talks, too!”

An older woman comes inside with her friend. Her friend gets her nails done first, silently. Then, she sits down. She smiles wide, compliments me on the installation. I thank her, hoping she’s not going to ask me to start explaining what it’s all about politely.

After I finish, she tells me, “In my entire life I’ve never had my nails painted. Not even when I got married, I barely even brushed my hair.”

I am not sure how to respond in character smile at her. She says, “This is so lovely. I feel like a really glamorous lady!”

She picks up her bag with her wrist and elbow, carefully avoiding her new glamorous nails. She floats out to find her friend, who’s already gone.

A short guy with a ponytail comes in. He has one finger painted, so he’s been here before. After the room empties, he sits down in front of me.

“Back for more?” I ask, wondering if I shouldn’t have said something sexy suggestive, even in character, when I’m alone. I might be asking for it inviting gross deviant behavior.

I’m careful to stay short, confrontational, professional - in character - with him. As he asks me to walk him through my artistic choices, making me feel less in control intruding on my scene. He seemed to be flirting with me invested in the work. He asks me if I ever need help, for example if I ever hire interns. “Yeah, I’d love an intern,” I laugh.

“Okay. You can expect to hear from me soon.”

He stands up. Stops. Leans back over, in my space the space between the hanging glass and the table. “Do you want it in any specific format?”

He leaves. I breathe again, realizing control is a carefully crafted illusion, even in the space I’ve made commenting on that very idea my right shoulder has been twisted forward and lifted up the entire time.

Another girl, younger. Maybe 4 years old. She comes in with her dad. She’s painfully shy, stares at me unspeaking because we’re taught from a young age to be afraid of women in positions of power i’m in character. But when her dad tells her she can get her nails done she grins and sits down.

She’s barely taller than the table. I can hardly reach her tiny hands. She’s so still for someone so young.

She looks at the film and back at me with two of the widest eyes I’ve ever seen. I feel like she’s intuiting something deep down inside of her tiny body, but know that’s stupid she’s probably still just afraid of strong women me.

She runs back to her dad. “Show me your nails,” he says. She shows him, smiling, proud. He scoops her up, and kisses her, and tells her she’s beautiful. Carrying her, he leaves.

I’m left alone in the box, sitting behind my pane of glass, contemplating meta-narratives,  ashamed of myself deeply conflicted.

A man and a woman peek through the curtain. I peer back at them through the glass. The man tries to walk inside, the woman pulls her boyfriend him violently away by the elbow.

I don’t see them again.

Ponytail is back. He’s been sitting in the corner for almost an hour. He’s seen the entire performance cycle twice. I’m creeped out really not sure why he’s been there so long.

When a bunch of teenage girls people come in, he gets up and walks away.

None of them want their nails painted.

A man walks in with a few friends. He sits down and asks me what my installation is about.

Truly, nothing annoys me more than this question I’m curious to hear what he’s confused about, so I ask him what he thinks it means.

“That all men are horrible.”

“But all of the stories are about nasty things that men have done to women.”

“Why do you think that might be, genius?” “How do you know that everyone who wrote these stories are women?”

“One of them is mine. The rest are collected.”

“Oh, yes. Two women together are much worse than a man and a woman together.”

“You’ve entirely missed the point, idiot.” “What makes you say that?”

“I have two sisters and one brother.”

“Which story is yours?”

“The first one on the right.”

He stands up, satisfied with himself. “Well, this is really cool, and beautiful. Thanks.”

Douchebag Ponytail is back, again. Did I invite this? He waits until the container has cleared out, and sits down in front of me. He has a folder in his hand. I’m afraid preparing myself to leave the container.

Bre comes in; we’re meant to change shifts. I know she’ll be in danger alone with him. I try to apologize just by looking at her look at her. I leave.

I am really afraid run to security. They go to our container right away, and stand outside of the container until he leaves. Bre is left to resume breathing. He’s left me her his resume.**

A man comes in with his son, a toddler. He immediately sees the floor projection, and below the projected dancers.

As they move, he jumps on them, seemingly trying to catch them.

“Honey, be careful, this is someone’s art,” says Dad, scooping up his son.

They leave. I’m left alone behind the glass, wondering if Dad will tell Son why it’s unkind to stomp on women or if he’ll grow up thinking it’s all a fun game again contemplating meta narratives.

I’m inside the box, but not angry in character. I’m watching Bre perform. Eight days, and nearly 250 loops later, we’re on our last interaction. All of our papers are a crumpled, dirty, torn up mess.

There are two people watching - they’ve been inside since I was performing, but they’re not at all creepy genuinely excited.

Bre and I are not quite ready for this to be over exhausted. She laughs. Papers fly. Music swells.  We walk out of the box for the last time.


**To Douchebag’s Ponytail’s credit, we had a two hour long conversation following this interaction where we talked about his experience inside of the installation, and why his behavior made us uncomfortable. The conversation was hard for me actually very open and honest. Leaving our conversation, I was left with the impression that Ponytail was impacted by our work, anc can only hope that he understands the implications of his actions.