When I direct, observe, and teach performers- I face the same paradoxical phenomena in all three situations. The necessity of technique and its stagnating damaging effect on the performer.  The question then is “What is talent and the role of technique in training?”

In the ‘80s, I attended a performance of the Merce Cunningham Dance Company at Lincoln Center with my 4-year-old son. Young beautiful dancers moved their limber bodies in perfect technical unison in interesting abstract patterns.  It was pleasant to watch but everybody around, including me, was not really engaged as they watched.  There would be slight movements and coughing among the audience members and my son was restless.  Then suddenly, the company dancers moved aside and a petite, fragile, old man whose body was visibly affected by arthritis came on to the stage.  His movement was minimalistic, he didn’t fly through the stage like the youthful performers yet his dance was like a spell over thousands of people in the theater.  My mind seems to have dissolved and was penetrated by what was happening on the stage.  There was a magical silent presence that seemed to unite everyone in the audience.  Without looking, I knew that my child was still and part of that magical suspended moment. The male dancer left and disappeared behind the moving bodies of the other dancers. The audience resumed fidgeting and the magic disappeared. That performer was Merce Cunningham, himself. Decades passed but that Merce Cunningham performance remained for me a source of inspiration and wondering.  Years later, my beloved brilliant teacher Elaine Summers afflicted by severe osteoporosis performed in a small space for an invited audience and once again the delicate minimalistic movement brought me out of my regular state of mind into this sphere. I recall these magic moments when my mind retreats backstage and I am no longer separated from these experiences.  So once again, the observation becomes the source of inspiration.

This brings me back to my thoughts about technique: its illusion, its necessity, and its danger. As a young student, I fully applied myself to studying acting technique.  After two years of training, I became aware that my passion, enthusiasm, and spontaneity in my earlier amateur work gave way to continual conscious self-directions, almost paralyzing doubts, and a lack of inspiration.  I noticed very similar results among the other young actors with whom I studied with.  These observations were the beginning of my departure and rebellion from what I was taught about the creative process. Training was broken into rationalized units, becoming instructions given to me by others.  I observed performances that became executions of preconceived rehearsed ideas.  We see the copy of the original that at some point was alive.  As Grotowski would whisper pointing to actors: “Dead” or “Alive”? I don’t believe there can be a general technique that claims to be one-size-fits-all in any particular art form.  For me, it’s first intuitive and then a more conscious recognition of a universal law at the base of our nature and in our specific art mediums.  It’s not the shape of steps but the performer’s life through and within the steps.  Galina Ulanova, one of the most legendary ballet dancers of her time, said to her friend “..ballet is just a number of exercises, what makes it art is something else”. She was considered a very poor student while she was in school.

I started to re-think and re-imagine training from one basic concept: the body is a sponge that has to absorb the mind and the mind is also a sponge that has to absorb the body. The artist is an awareness that is present and transforming the sponge.  We can train our muscles and our vocal chords, but the challenge is to develop the artist, the awareness, that penetrates our muscles, bones, organs, and connective tissues and our very mind.  Then neither my mind or muscle are in charge. 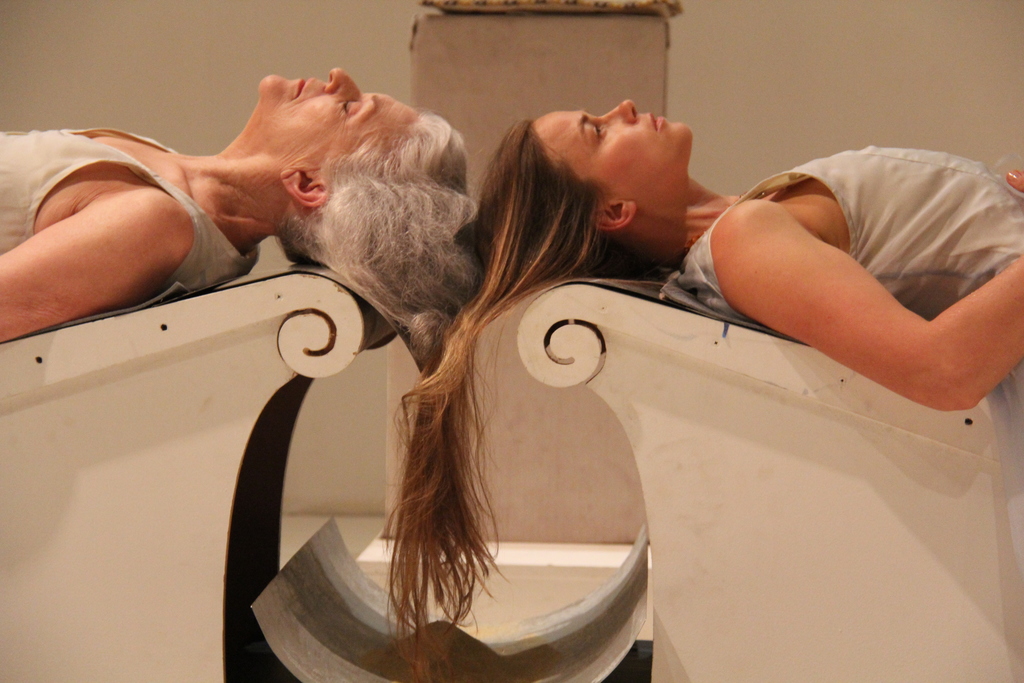 This concept can be observed from very simple tasks like running to the subway.  My mind and nerves are rushing when I’m late.  I ask myself “But who is going to do the running- My feet!”  I become aware of my feet and let them do the job.  I hold a heavy bag, many muscles tensing in doing so and I ask myself “How much does this bag really weigh?” and suddenly become aware of gravity and let my body adjust in relation to it.  So on and on, it’s a constant process of taming the daily mind- the dictator to listen to every cell in its domain.  Here are the internal politics I believe in.  The technique, like life, is in continual flow and cannot be fixed. I believe no technique can be turned into rigid law and fixed exercises.  It’s challenging because it is scary, it pulls the rug out from under your feet.  Too often technique is turned into the shield to protect one’s vulnerability and give the illusion of ‘knowing’ what one is doing.  I heard from many actors for whom their confidence was based on their technique. When they discovered that the technique is not working they went through a huge crisis.  The continual need to find the protection and security makes technique rigid yet we need technique as a continual process of self-awareness, of growth, as a continual practice of what we need to be fully alive and creative.  We have to be very alert in one’s personal training and work that technique never becomes another tool, never becomes a substitution for being in now.  The real technique is an ongoing preparation and our ability to face the moment naked.  Insecurity is and must be our security.