Eunjin Choi: Congratulations! Please briefly introduce the festival to us.

Bokyung Lee: After moving to the United States in 2011, I have been working in New York, New Jersey, Washington, and Chicago. So I was able to experience American culture as well as Korean culture. And then I got also curious about other cultures as well so I’ve been thinking about presenting my work in other countries. While watching a website called "Dancing opportunities" that shows dancing festivals, residency programs, auditions, workshops, and performance information from many countries, I found the International Contemporary Dance Festival (Festival International de Danza Contemporanea de la Ciudad de Mexico), which is one of the most influential contemporary dance festival in Latin America, that will be held for the first time this year as "International Dance Contest for Mature Contemporary Dance Pina Bausch Award".

I accepted the challenge without hesitation because I was fascinated by the German choreographer, Pina Bausch, who uses the movement of dancers and other mediums to express the inner human emotions such as fear, anxiety, pain, and happiness with a critical perspective on social issues and create genre-bending works. EC: It may have felt unreal. How did it feel when you were announced first place?

BL: From the announcement of 4th place onwards, the soloists on the stage and the audiences waited in silence, cheered, and expressed disappointment together and as one of the soloists I stood there on the stage feeling subtle and complex feelings when they announced the 4th place, 3rd place, and 2nd place performers. When I finally heard my name when they announce the 1st place soloist the first thing that came to mind were my parents who passed away last year. The happiness I felt was of course fulfilling, but it was more meaningful because of the nostalgia and gratitude towards them. 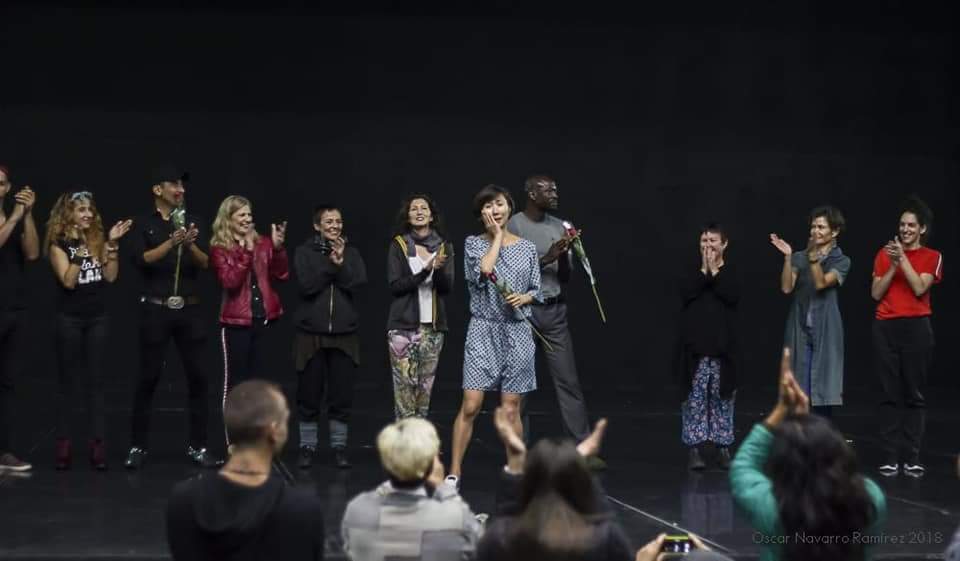 EC: What did you want to convey with your work?

BL: Big Mouth II, the work I received the award for at the festival, is about 'talking.' The phrase 'big mouth' means to be 'indiscreet', 'boorish', 'gossipy', and 'spread secret'. Sometimes it’s helpful to say things than to say nothing, but I thought about the possibility of harm from talking. What if people judge us by their own eyes when we judge others by our view and prejudice? What if someone is reveling in our story when we enjoy gossiping others? Yes, we should think and be careful about not spitting out others' stories. Every time I present my work Big mouth II, I wanted to ask the audience about their experiences. Have you ever been hurt by "talking" even once? If so, how did you recover from that wound?

EC: The First part of the performance is impressive. What kind of influence did you expect from the relationship between movement, music, and sound?

BL: The first part of this work starts with laughter and mumbling self-talk. It is a pleasure when people talk about other people’s story that the person wants to hide. I thought that could be the biggest pleasure for them to talk about other people’s story. And the repeated floor movements represent time. Once you feel pleasure about something, it will be hard to stop yourself even if it is bad, and eventually, you will forget that you are hurting yourself too. It’s like a drug that hard to quit. Even though you know that it’s hurtful you can’t stop and eventually become numb, so you don’t even realize what you’re doing. I guess I should study the relationship between talking and drugs.

EC: As far as I remember, this work has been presented in many places and also created in various versions. I think, to develop a single work by repeatedly presenting in small or large places is a crucial part for the performance itself, and at the same time, it needs artist’s strong drive and patience. Could you tell us a brief history of this work?

BL: Yes, there were a lot of small performances, but the big stage performances were Big Mouth at M Theater in Seoul in 2016,  Big Mouth II at 92Y in New York in 2017 with live piano, and Big Mouth at SOAK 2018 as a guest artist. Since then, I've made an abstract version for the International Soloist Contest in Mexico and won the first place among more than 300 international dance artists. I also showed this piece in collaboration with a Korean traditional instrument Kayagum player at Art All Night in Washington last September. And we are going to stage Big Mouth, The Third Story at the Seoul International Choreography Festival in Korea which is coming up in December. EC: How did you build your career as a choreographer?

BL: I left behind my career in Korea for marriage and immigration to the US, and my career in the US started with depression. I practiced dance since I was seven and performed continuously throughout my life in Korea and it was hard for me to stop dancing and working with other artists. In the meantime, I found out that a professor of modern dance at Ithaca University was having a sabbatical so I contacted the person and I was able to give a workshop and lecture at the university in 2012. After that, I was able to resume my lectures and performances in the name of the BK Dance Project, breaking my one year vacancy period. Even when I lived in Ithaca I performed in New York City but after I moved from Ithaca to NYC in 2013, I found more opportunities to work and perform, and I started to build on my BK Dance Project.

EC: Who's your favorite artist? Please introduce the artist who influenced or inspired you the most.

BL: I was interested in dancing and acting since I was a kid. Because dancing is a way of expressing human emotions using the body as an instrument and moving the body without feelings is for me just a movement or more like sports. Pina Bausch, who uses the movement of dancers and other mediums to express the inner human emotions such as fear, anxiety, pain, and happiness with a critical perspective on social issues and create genre-bending works. I was fascinated by all of her works, and I think about inner emotions every time I work as an artist to dance instead of just performing dry movements.

EC: Is there anything you aim to commit to every time you work?

BL: Not to fake it. Identify and express the true meaning.

EC: What do you do to be inspired and maintain it?

BL: I try to experience as many films, art in museums, artworks by famous artists, children's picture books, music, etc. as I can and observe people on the streets as well as children's movements. When I come across a word, I try to think about the meaning of the word and the situations, possibilities, and memories that can be correlated with its meaning. Everything in the world can be an art piece.

EC: How do you spend time in the studio?

BL: The first thing I do after arriving at the studio is cleaning the floor and laying on the floor to start stretching. I finish the bar movements and warm up with jumps then I start practicing. When you practice using powerful movements without thoroughly warming up, there's a higher risk of injury, and I don't want it to become a distraction in my life. I also try to focus more than usual while I'm in the studio because I think a lot about how to use and save my time and how to live a rewarding day.

EC: What's your plan? Is there any new piece that you're working on?

BL: I will continue to think about and revise for the Big Mouth, The Third Storyfor the Seoul International Choreography Festival in Korea in December and I’m also planning to make this piece in a larger one-hour long piece with other dancers, video artists,  and live music rather than a solo piece. In 2019, I plan on getting a taste of the performance scene in Europe and look for opportunities to perform at dance festivals. Bo Kyung Lee received Ph.D. degree from the Department of Living Dance and Performing Arts of Hanyang University in Korea. She received the Presidential Prize at the 7th Nagano International Performance Competition, and the 1st award at International mature soloist contemporary dance contest(FIDCDMX) in Mexico. As a choreographer and a dancer, she has created 27 pieces and danced many performances. Since she moved in New York, she founded her own company, BK dance project, in 2011. BK Dance Project aims to transform people's varied interests, experiences, and happenstance into an art form through the performer's movements and emotion. The company draws on diverse influences and genre of art to better engage and enliven the audience. She has presented her works in multiple events, New York Wave Rising series (2009 and 2012), LGDF in Cornell University (2012), CoolNY Dance Festival (2013 and 2014), Korea Dance Awakening (2014), and K Dance In New York (2015), and Going Dutch Festival in Chicago(2015, 2016), WAXWORKS, Pan Asian Dance Festival(2017), SOAK 2018, Art all night in Washington(2018). She presented workshops in Rutgers University (2009) and Ithaca College (2011 and 2012), Queens Museum(2015) and taught a modern dance class as a lecturer in Ithaca College (2011).