"Becoming-Corpus" plays with extreme states of the body.  At times we move as slow as we possibly can, other times we push ourselves to move as fast as we possibly can.  Sometimes our movements emphasize our muscular strength, sometimes we attempt to completely forget that we are made of muscle and bone.  Tension and softness are in constant dialogue.  Over the past few years I have discovered that my impulse usually moves me towards tension, and lately I have been wondering about softness.  What does it mean to become soft?  What does softness look like?  What does it feel like?  What are the different kinds of softness?  Are there different ways to embody softness?   What are the relationships between effort, imagination, and softness?  What are the relationships between lightness, heaviness, and softness?

In rehearsal, we are encouraged to use our imagination to help us embody to different qualities.  For some of us it seems easier to focus on the imagination aspect, while others seem to grasp a movement more quickly by discovering the technique.  Is this difference visible?  Sometimes it seems easier to me to impose the imagination after I feel confident in the technique, and sometimes I feel that I completely abandon my body and give in totally to my imagination.  Each dancer in the company has a distinct style and approach to movement, even when we are dancing in unison I wonder what the others are thinking and feeling.

During my first workshop at Cave in fall 2011, I remember Hisako Horikawa mentioned "small energy."  The exercise we were doing called for minimal effort, however our bodies were not supposed to be completely limp.  I have recently begun to consider this idea of "small energy" in relation to some of the exercises and qualities we employ in rehearsal.   Take, for instance, the image of a "water-body," or, a skin sack filled with water, empty of any bones or muscles.  We often use this image to help us to move without the use of our muscles.  We allow ourselves to be as soft as possible, and we allow gravity to help us move.  It is particularly when we are engaging this image that I sometimes find I let my body become completely limp, because this fits my idea of no effort, no tension.  Lately, however, I have begun to use the idea of "small energy" during our "water-body" exercises.  I believe these two can go hand in hand.  I believe there can be energy without effort, and this energy can allow me to achieve a certain lightness and delicacy, in contrast to the heaviness of a completely limp body.

Another thing I am considering is the use of the core.  Much of our choreography for "Becoming-Corpus" requires a strong core, or abdomen.  For example, during our "water body" exercises, we often create an impulse from our tanden to initiate the movement.  It is a strong center that allows us to be soft.  Recently I took a class which challenged this notion.  The teacher acknowledged that having a strong center is fundamental to many dance practices-- it aids with balance, control, injury prevention, etc.  This particular teacher, however, puts no emphasis on core strength.  She does not think of the body as being grounded by one center, but she considers the body to be many elements holding each other in suspension.  She does not think of her main support as coming from her inner most center, but rather she thinks of herself as supported from the outer most tips or her body, such as her her fingers and toes.  She finds that, for her, it is possible to move with the least amount of effort when she thinks of the movement as beginning from her distal ends.

This image of the body as elements in suspension compliments the notion of "small energy" coursing through the body.  Both of these ideas help me to be aware of each part of my body, down to my fingertips.  These thoughts also help me to be soft without being limp.  Still, there is a question in my mind about the distinction between this kind of softness in contrast with the example of the "water body."  There is a heaviness associated with water that prompts me to relax completely when attempting to embody the image.  Or maybe water and lightness can exist together... why not? 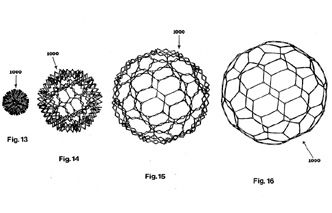 [The Hoberman Sphere came to mind when considering the body as interconnected elements supported in suspension.]

Song Dong "Doing Nothing" at Pace Gallery on 25th St between 10th and 11th.

A week ago I walked into this exhibit by chance, and it was one of the most interesting gallery shows I have been to in recent memory.  Song Dong works across many different mediums, including text, sculpture, video, photography, stop motion animation, and more!  I am interested in his exploration of "Doing Nothing" as it relates to his own Chinese national and cultural background, as wells as within the context of the city of New York which is (in)famously known as "the city that never sleeps."  Check it out, it's free! A glimpse of Song Dong's sculpture at Pace Gallery.

So who was the teacher who put no emphasis on core strength, but rather her tips?