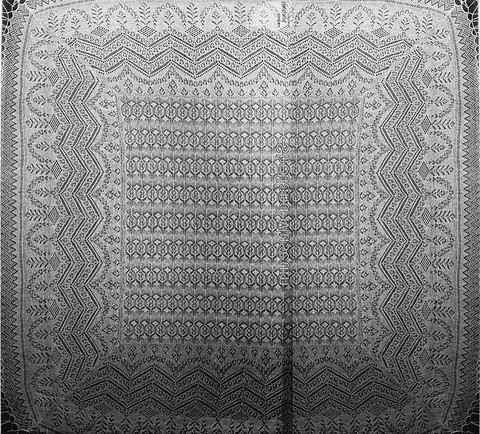 Intro.
This is a story of one restoration project, created by the group of dedicated knitters and their pets, freely available for download and share via Ravelry, a popular knitting community site.
Here is a link to the Ravelry Heirloom Knitting Forum as well as PDF pattern and project documentation:
http://www.ravelry.com/designers/the-ravelry-heirloom-knitting-forum
http://www.ravelry.com/patterns/library/the-queen-susan-shawl 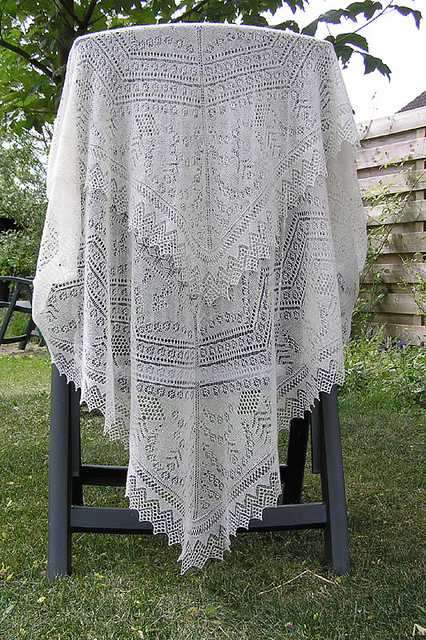 Economical Perspective.
Continuing ennoble traditions of Conquistador Hernán Cortés who squeezed last drops of gold from Montezuma in their unfair game, most things in Neoliberal Posthuman America are about giving and taking, and the legendary greed of Gringos is forever folklorized in a redheaded visitor to plantations and mines of South America (Devil and Commodity Fetishism in Latin America by Michael Taussig). Interesting, that women never use money generated with the help of Redhead Devil, because such resources can not be utilized for everyday needs such as food or childcare (usually handled by women), but only for luxury objects and gaming. Here comes The Art (Industry) -- the production of luxury objects for a leisure class.
Mahabharata dice game leaded to lots of dead elephants among other things, but eternal return shines brightly with the promise of Goodness taking the ruling wheels of fortune in it's powerful hands empowered by weapons of mass destruction given by gods to the brightest and smartest, Arjuna it is.
In his Giving and Taking book Peter Sloterdijk taps into that value of art which is overlooked and transcends financial approach to culture.
Movements. 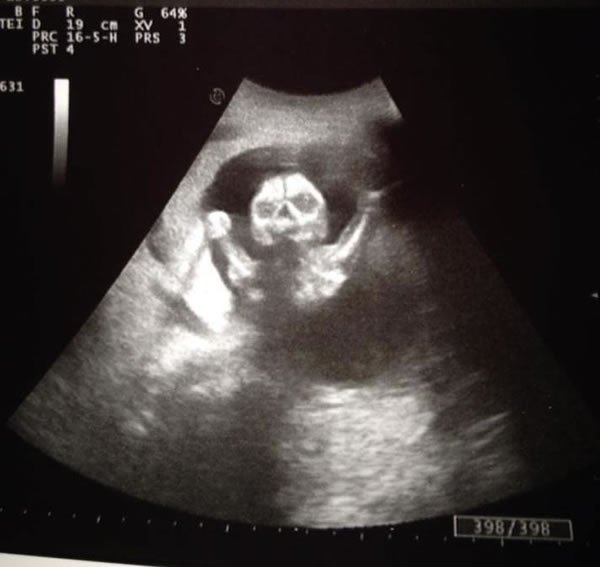 Every baby is innocent (even Rosemary's), and every movement starts from noble cause, but "the road to Hell is paved with good intentions" nevertheless, and most coins not reduced to PowerPoint versions of themselves, have at least 3 sides: interchangeable top and bottom, and inevitable circle of side effects, not even mentioning negative space, color waves, and internal pressure in all it's Newtonian glory, as well as financial value by the way.
Beautiful artifacts of the wave of nationalistic moments of the beginning of 20-th century convey opportunities concealed in today's age of moving populations and terrible refugee crisis -- many people dig to their roots, cultures intermingle, creating unbelievable possibilities for new creative explosions.
Internet enables everyone connected to communicate their ideas, while generating free content for digital overlords, with exchange for total surveillance and crepuscular control, and as an unlikely artifact of other unrelated modalities, empowers Creativity, Collaboration, and Cooperation -- a glitch where Money and Competition hadn't spoiled things yet.
Even though some male fashion designers made it to the Met, officially, knitting is not part of Art Olympus. Even Games made it there already, but knitting is a vintage housewife's hobby that gets categorized strictly as "Arts & Crafts" at best, not "Fine Arts". Aquarelle used to be in the same category, but somehow made it upwards, so there is a hope.
Art biennials are full of yarn lately, but it's more destructive and gloomy -- usual must have components of Sex & Violence habitually objectify the Feminine. Smashing a violin on a stage requires neither special skills, or training, or even elemental understanding of music -- even thought there is an easy poetry in violence, poesy becomes irrelevant in a commercially driven desensitized rent economy of fast financial investments fueled by debt peonage. It's much easier to write a whooping march, then to create a sophisticated symphony that requires time and resources to mature as well as educated audience to appreciate.
Perils of quantum Womanhood.
Women in America after reaching their post-reproductive and post-representational age gain such fabulous levels of invisibility that can compete with Schrodinger's cat. Their historical significance of providing love and care for the family was monetized long ago and as any Zombie technology (ref. Zombie Media of Jussy Parikka) now has a potential of becoming Fine Art.
In her Daughters of Alchemy Meredith K. Ray describes a tradition to share notebooks of recipes and what not among ladies of Italian Renaissance, just like their famous men counterparts, girls used to write their own Tractatus'. Those notes were shared among friends and admirers, but unfortunately, only tip of the iceberg stays visible through layers of amnesiac descendants enchanted by the Pops -- Da Vinci's diaries made it to 21st century collecting tones of supporting materials without giving due credits to origins.
Bobbin lace is essentially a binary operation, and algorithms shared in pattern books of Freifrauen of the world suspiciously resemble early computer programs for ballistic calculations, and arguably can be natively read by Assembly compiler. Knitting is a bit more complicated system, and crochet verges with quantum logic.
The first algorithm for computer program was written by the Countess Ada Lovelace, the daughter of Lord Byron.
Before the invention of electronic computers, "computer" was a job description, not a machine, women's job that is. Even before World War II ENIAC engine, women were considered "detail-oriented" and well suited for office jobs such as telephone operators or programmers.
Men lace composer -- Herbert Niebling
Love and Kindness is the future of Art.
Traditional Love Magic of Madagascar involves Dancing with Corpses (David Graeber)
Intergenerational transfer of knowledge..
Taussig - The Sun Gives without Receiving
Using versus creating
Therapeutic properties of ephemeral Grids.
Oh, doilies! -- Mandalas of the 60's housewives, flowering particle systems of infinite domesticity, naively composed bifurcation algorithms, artifacts of hours of private meditations starched to conform to societal norms. They could become weather patterns, they could evolve into Strange Attractors and become chaotic explosives, but no, here they are in women's magazines, luring from vintage photographs of bourgeois homes, sneaking from polished furniture and boxes of Valentine's chocolates, criminal ornaments quietly sitting under neath of crystal vases with dead flowers.

Wolfram's New Kind of Science 'discovered' 255 patterns out of which all possible combinations of patterns on animal skins, shells, plants formations, and so on are composed in nature. From the knitter's point of view, his discovery is a beginner's knitting diagram, not specifically interesting. Maybe cellular automata, the Game of Life comes a little closer, infinity systems, and Lorenz's algorithms... Can it explain why so many women programmers are avid knitters, exchanging inevitable occupational antidepressants and other pharma-junk for recreational yoga and lacemaking?
Actually, it's very easy to get into the realm of chaos when knitting a doily, and most tips, tricks, and equipment related to this technique are built around controlling the chaos (hello Dr. Sigmund, watch realization of your conscious dream).
One of such instruments is an organization of pattern into grid system, or multi-bifurcation diagrams in the best Dada poetry traditions in case of doilies ('Father forgive them -- they know not what they do'). For example, one line of lace can be represented by following notation:

Our society is obsessed with grids and maps, starting with Excel spreadsheets, database models, and Google maps to rewriting histories by redrawing borders and melting primordial ice. (see Edward Said on maps) position and momentum algorithmic efficiency
Our pasteurized digital culture lacks haptic experiences and fleshy dirt of life. Since Bauhaus and Le Corbusier Art was systematically sanitized off filthy alchemy of paint (What Painting Is) and poesy of anything remotely feminine, unless it's been objectified and devoted from childbirth, midwifery, and other ornamental witchcraft. (Caliban and the Witch by Silvia Federici)
Therapy of sharing and caring
Anxious to share -- Jussi Parikka on Transmedia festival -- commodification of sharing economy by Uber
Michael Taussig points out in his talk in Tate Britain how society as a sum generates energy, and how all making is 'for the spirits', or the audience of one.
Taking (photos - stops life) - Making (drawing encompasses)
Anatomy.
There are many traditions and obscure ways to knit a seamless piece of lace. The Queen Susan Shawl from The Shetland Museum Photographic Archive uses traditional technique: center square bottom to top, right to left double-sided; then sewn in frame, followed by circumferential double-sided back & forth border. The shawl reproduced from the original photograph was upgraded by the group and frame was adopted to modern circular techniques. New tools allow to use circular needles with plastic band instead of usual 5 needles technique.
Music frozen in Yarn.
There is a value in playing musical piece over and over again, or in rereading the same book, or stepping in the same river twice. The urge to progress undermined and concealed this treasure from radar of European culture starting from Enlightenment.
Paraphrasing the obvious, happy beginnings are all alike; every ending ends in its own way (ref. aforementioned babies), puts the importance of the way over the ends of the thread.
Knitting is a creative process that starts from the idea, or inspiration, reads/creates notations, or flows via the making process free-jazz -- counting, or not, each loop matters.
Meanwhile, intercentural-intercultural symbolic exchange takes place, mixing species barriers...
Africal alphabets, drumming, messages of Persian carpets
Musical/dance notation systems
Mandalas
Haiku poetry
This shawl has following patterns:
Sheep, Rabbits and Butterflies (,and Goats too)
(Material aspects: cottage industries and ecology of yarn.)

Mere composition of yarn used for the shawl presupposes multidimensional integrated ecosystems that can produce suitable raw materials consisting but not limited to fibers of Sheep, Angora Rabbits, and Silk; sometimes mohair is used from baby Goats, or Swan's under-feathers in Russian tradition. That Yarn itself is a monument to capitalist exchange -- Silkworms of Orient meet European Rabbits, and greeted by nomadic Sheep.
The gossamer lace sickness of the yarn requires very specific quality of fiber, so one has to make sure that the Sheep was walking and grazing on a very specific pastures in a very specific climate, that Mulberry trees are pollinated on time, that Rabbits are not forced to become carnivorous, and so on -- all that carries whole ecosystems within itself, at least three to be specific.
Protein fiber requires special care ...
The future is quantum (computing), further digging into alternative (mathematical/logical) systems to produce new modalities of thinking that are not limited to 3D, and recognizing Art as a symbolic atmosphere of society that can only be perpetuated by sharing & caring, love & kindness sustainable ecosystems.
Shawl file