This article is a contribution from 2017-2018 LEIMAY Fellowship Artist Polina Porras Sivolobova. The LEIMAY Fellows are a group of local artists working individually throughout the year at the LEIMAY studio. This year marks ten years since I graduated from Pratt Institute in New York City. I finished with a Masters in Fine Art and Art and Design Education. My thesis was an exhibition of interdisciplinary works: 200 drawings, performance and video. Since then, I’ve created around 20 original one-time, site specific performances or actions.

As an artist, it is a pretty big deal when one of the key ingredients/skills of your work – creativity – “disappears.” Imagine owning a restaurant and having just a few cucumbers and some dry bread to make a complete meal. So what do you do? Although the answer for a restaurateur is pretty much straightforward (if you want to stay in business) – you go shopping- but for the artist the answer is a bit more complex. The answer is to Continue. The challenge is the how to continue making art, it’s one thing when you float in clouds of creativity but it’s quite another thing when to make a creation of the size of a pea hurts like having a baby. But I will leave my reflections on the how to continue for another time. For now we will stick to how it was for me in the past, this is a reflection, a short journey into my creative process into how I’ve made art in the past ten years.

Most of my work in the past years has been performance art, public interventions and actions. I used to feel a strong desire to perform, do actions in front of people; it was a way to discover things about the world and myself. These performances were a way to dialogue with other humans; they were artistic social experiments.

How did these actions came to be, where did the ideas come from? An idea would come at a random moment, when walking or eating, back then it wasn’t a struggle, it would appear in my mind softly and naturally yet with clarity. It would touch something inside of me, a physical sensation accompanied with a clear image, almost like a finished painting. By the time these images would appear I would have been playing with some ideas in my head so when something appeared in the real world it would add itself to the image in my head. Then I would grab onto this initial sensation or image and then start expanding it, first in my head and then through drawing. One image would give way to specific moments of the performance, which in turn they would be threaded into each other creating a story, rather than a narrative story its cohesion would come through a sense of visual theatricality. A clear example of this process was the performance Viva la Vida. It started from a personal desire to throw a watermelon into the wall of a church (don’t ask me where this idea came from), I imagined doing this at night, when no one would be watching, it wasn’t meant to be for an audience. This one-action idea, in the course of 3 months became a six-scene performance with rehearsals, live music, the participation of 27 school children (including teachers, parents and the principal), with the support of the local museum of contemporary art, the smashing of 30 watermelons, in broad day light, the priest’s approval and more than 300 audience members. In my work, a point of departure has been the self - myself, encompassing the physicality of the body and the dimensions of the psyche. In some cases, the body would serve for autobiographical explorations (a characteristic of many performance art works which can fall into a kind of narcissism) and in other cases, departures of the self and into the creation of new-personas.

Audience and site specificity have been key elements in the creation of my work by informing the nature of the participation. A gallery in New York City would offer a different range of possibilities than a street intersection in Oaxaca. This range of possibilities would be interlaced into the piece’s theme creating a set of possible interactions, images, emotions and reactions and new possible connections and meanings. Back then; all these elements dropped in front of my mind-eyes with vivid clarity, just like a Tetris game or like Neo decoding The Matrix.

Early on I became interested in archetypes, psychology and symbols. First, these served as a way of understanding my own life, and then when I got tired of thinking about myself, these female-archetypes became like new friends or possible new-selves (it’s all about the self anyway). Many of these women were from literature – like Shakespeare’s’ Ophelia or Remedios La Bella of “One hundred Years of Solitude.” These women struggled with depression, attempted suicide, suffered violence, were lonely and in pain but they were also resilient, they knew that they would overcome their difficulties. Most of them didn’t speak, they were not able to utter sound, their battles were inside them. Speaking of speech, in some of my performances I explored the inability of sight – either by blindfold, restraining to open my eyes or pouring lime’s juice directly into my eyes. 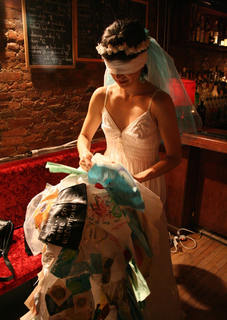 What Left and Yet Remains, 2008, New York, photo by Karla Landgrave The theme of suffering has been clearly part of my repertoire. My thesis work (2007) was the perfect epitome of suffering; Las Tristes, Muertas Y Dormidas, which translates as The Sad Women, the Dead Women, and the Women who are Asleep. Some years later, in 2013 and as part of another performance, I re-read parts of the text from Las Tristes, I was shaken by its violence and hopelessness. The text was a conversation between many women or possibly one woman talking to herself, as they(she) lay in the dessert -

“ How have you survived such a drought? All by yourself?

I came in March, they said there were ten more from April to September, they’re lying, it’s forty-five more.

Right next to that mesquite, that is where it happened, that’s where they killed her.

Eyes wide open; my voice was silenced by my own heart.

Tied with her own shoelaces, raped, mutilated breasts, broken neck.

Our bodies are to blame, they say.

The work made a direct reference to the murders of women in Cd Juarez, Mexico and indirectly to the issue of “…women’s (mis)education, part of an intricate cultural system of values and prejudices, which usually play in favor of men. Writer Ana Castillo writes, “We are afraid to see how we have taken the values of our oppressor into our hearts and turned them against ourselves and one another.”” 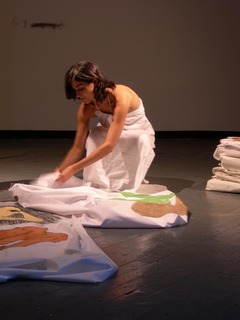 One and Not the Same Sking, 2013, Glass House, Brooklyn, NY, Photo by Eyal Perry

Exposing suffering and violence as I did it in my past work, doesn’t interest me much now. We live in a world so full of it so I hope to join in the conversation with new more insightful perspectives. In regards to self-referential work, it is an important part of an artist career as a way to grow by testing and practicing vulnerability but the artist cannot remain in it, it has to transcend the self.

Then in 2012, I did a performance for the stage, during EMERGENYC, a program organized by the Hemispheric Institute of Performance and Politics, titled “Self-Anatomy 101.” This work marked a departure from my previous work, although it was still about very much about myself it was done in a different tone and rather than being about pain it was about cultural identity. It was a short piece for the stage, I used an original text and I even used sarcasm and humor to explore the pros and cons of being Mexican-Russian-American. 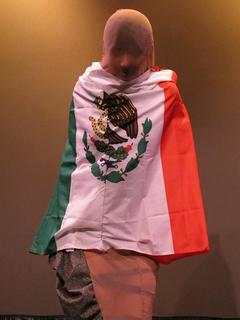 Photo by the Hemispheric Institute of Performance and Politics

After that performance I did a series of works delving deeper into my Mexican roots; ritual and Catholic iconography became key elements. With this departure, especially the use of religion (since I didn’t grew up religious) I had turned my back to myself as a subject (so I thought) and I was happy.

Two works, both done in 2014 brought my explorations of ritual, Mexican iconography and Catholicism into a high. Viva la Vida and Santa Agua were spectacular and very Mexican; they had to be done in Mexico and for Mexicans. If done somewhere else they would have been confusing and/or improper, or just un-doable. In both performances I created a rich web of historical, socio-cultural and personal syncretisms; a layering, over layering of related and unrelated stories, rituals, and symbols, so overwhelming that I’m still trying to understand how it all happened. But the truth is that they did happen - I smashed 30 watermelons in front of a church and was covered with honey and glitter by children as I lay on the floor and I paraded around a plaza, hanging from the top of a crane dressed as the Virgin of Guadalupe. 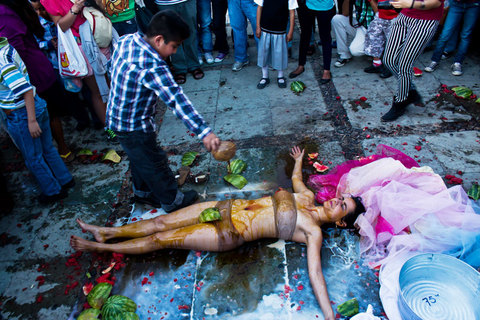 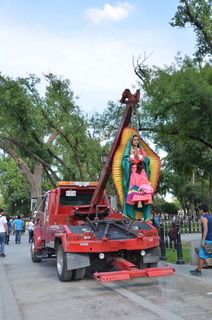 Since then, I have done many other works but nothing compared to Viva la Vida and Santa Agua, those two were surreal not only in their themes but also in the amount of work involved. But I continued to explore themes of female iconography, play, storytelling, ritual and the personal.

But as I started saying No to collaborations, projects, ideas, and people I ended up saying No to my work (and I had the desire to burn it all), I also started disliking performance art. And with all this came self-doubt and fear.

This year, I created another new work for LEIMAY’s SOAK. Lilith Under the Last Tree, the first woman on earth cradling the last tree on earth, which is, encapsulated inside a TV screen. With it I hoped to create another departure for my work, making it more “sustainable,” more repeatable, more expandable. I don’t think I accomplished my initial intentions but instead I discovered many other things but more on Lilith in my next essay.

The ephemeral nature of performance art makes the artist who makes it ephemeral too. The art form has a sense of weightlessness; a ghostly appearance of once it’s done is gone forever. My performances “live” in the dozens of hard drives that store their drawings, writings, pictures and videos and hopefully in the memories of many people. I don’t know what I am going to do now but I know that as the characters of my performances, I will find again my vision and I will speak and fight when the right time comes.