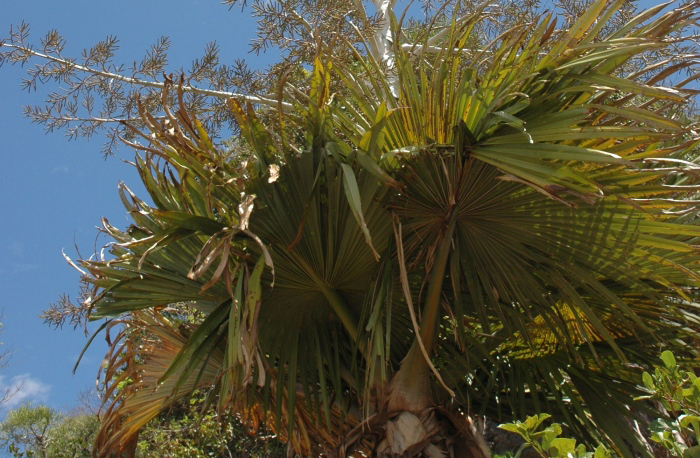 Tahina Spectabilis, otherwise known as dimaka, is a rare and endangered kind of palm that flowers itself to its own death in northwest Madagascar.

This kind of flower behavior,  described as hapaxanthic or semelparous, has been ascribed to plants alike who flower once in their lifetime and consequently die.

It is thought to take up to fifty years to bloom over eighteen meters high before the branches burst into hundreds of tiny yellow flowers, and the palm's supply of nutrients runs dry as it fruits and the tree collapses. (1)

Light internet research farther reveals that Tahina Spectabilis keeps its own dead leaves layered underneath the new ones until they eventually collapse under their own weight as the tree continues to flourish.  The trunk, according to one site, will bear ring scars from the fallen leaves. (2)

I first encountered any mention of Tahina Spectabilis during a brief flash on a screen of a slideshow presentation delivered by Marina Abramović at MoMa Ps1 this past July 14.  However brief the flash, as Marina passed over the slide in haste, I'd like to consider for a moment the arc of Tahina Spectabilis's lifespan as a way to look at how we can remain engaged in our own performance art practices.  A return to nature as an alternative approach to a radical disengagement with creative practice now.  How can we offer ourselves to what we create in sustained engagement in duration as in nature?

A casual perusal through recent headlines reveal the polemics that can come about with the increased visibility of an artist like Marina.  With more fractured, enmeshed levels and angles of visibility for art, the artist and cult of celebrity become increasingly mediated by new, individuated technologies.  Conversations over social media point towards mixed reactions that range from disillusionment and boredom with performance art now, to enthusiasm over more varied levels of accessibility of art otherwise seen as cryptic by a general public.  This is nowhere as evident as the latest media coverage of Marina's participation in Jay-Z's performance at Pace Gallery, which can be seen as a sign of the times, yes, but for all we can bemoan a medium's past worth, it  corroborates the presence of an audience for such work, what's relevant now and the potentialities to re-think and re-value a medium.

And I like what writer Gia Kourlas considers in The Times this week: maybe it's "less to do with provocation or shock than with relating the art form to the present."  These days rather than begging the question of provocation, looking to what a certain performance art piece provokes in us and how might accomplish a reconciliation between our own performance practices and the current cultural dynamics spearheading performance art in New York now.  What makes us indignant, obsessed, nonplussed, inclusively impressed?  What strikes us with awe and stupidity?  It's the very thing that makes you look at the person next to you and wonder what's stopping you from running around and screaming in the streets with all that's going on in the world, what with the Middle East, Snowden and the permeability of spaces that invites interference and often violence.  What is putting you in place?  And then you wonder what moves you.  That total, utter feeling of being beside yourself when a love displaces you into another unknown.  How are we positioning ourselves towards art and where does performance locate itself?

It's uncomfortable that we may not know at the current moment.  It may not be possible to know until we pass this moment, looking back retrospectively.  It's the embracing zones of indeterminacy.  How quickly it can become reductive to color the state of performance art now as mediocre.  And if we stain it with our disdain, how easy, to judge feeding our will to affectionately name, order, categorize, in lieu of actually doing something, namely an action to affirm ourselves and our limits.  We fear our capacities.  "I am definitely not for dark optimism," Marina remarks at the opening of the talk.  Dark or light, we can remember how the state of things is tied to us and look to the formidable yet poignant potencies flowering our bodies.