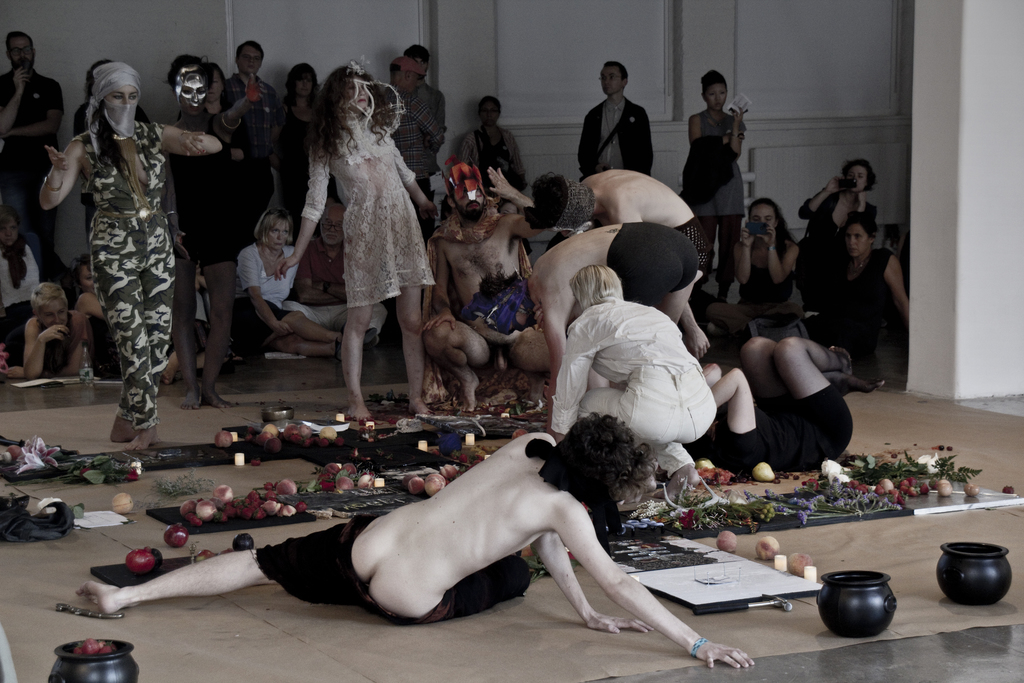 Marina Abramovic spoke of an age-old dilemma for one engaged in and practicing performance art at MoMA PS1’s Summer School Showcase last Sunday. She was of course referring to the cliché that performance art functions as the art world’s estranged and distant cousin—an embarrassing and primitive deviant to the material art world. However, performance art has now matured and gained rapport amongst artists, collectors and art enthusiasts alike. Built the strong foundations—notably that of the formative performance practices of 20th century avant-garde movements such as Dada, Surrealism, Viennese Actionism, Fluxus, Situationism, Russian Constructivism, Gutai etc., one could gauge the schismic shift in public support at this year’s showcase. Although Abramovic was referring to her own struggles as a performance artist in the 1970s where she had to ‘prove’ herself amongst the detritus of self-proclaimed ‘performance artists’ and their works, it was clear that the participating students and audience members had matured into receptive, well-informed, indicators of a new age in performance—no better explained than by the fact that admittance to Abramovic’s 4pm session had gallery attendants turning away eager attendees.

Whilst the connotations of ‘Summer School’ and ‘Student Showcase’ make one think back to tedious summers spent in painfully arid classrooms and blistering heat, this year’s program was no such trivial exercise. Rather, PS1 staged its own innovative take on the traditional ‘European summer academy model’. Now in its second year, the program hosted a range of performances and presentations by students under the direction and (spiritual) guidance of Steve Paxton, Genesis Breyer P-Orridge and Marina Abramovic. In an age where university programs and career artists encourage a ‘self-aware’ participation in the art market, what better opportunity than a summer school with three established big name performers and artists for students to attain a kudos-worthy addition to their curriculum vitae; and a platform for Abramovic to advertise her new school for the ‘Abramovic Method’ in Hudson. Abramovic went so far to have the packed Kunsthalle take part in a series of preconditioning breathing and warm up exercises in order to prepare what was essentially her audience. I couldn’t help but feel swayed and convinced that her methods were effective perhaps even necessary as an audience member whilst simultaneously feeling as if I was at a meditation camp and or self-help group—that is not to say the cultish undertones of the day did not stop there. Genesis Breyer P-Orridge’s workshop in the 2pm slot had what he called his ‘participating beings’ enact their deepest desires within a mise-en-scène that was reminiscent of a Dionysian orgy. Aside from being a leading figure in the industrial music scene—part of notorious bands Throbbing Gristle and Psychic TV—Genesis has also labelled himself as an occultist and a founding member of Thee Temple ov Psychick Youth. Alongside his music career, Genesis has been an active agitator of performance art in the everyday life shown in the beautiful love story between himself and his late wife—collaborator in the Padrogeny project. Continuing this spiritual ethos, students performed in what Genesis explicitly deemed a ritual¬ aimed to play out archetypal visual images of self-sacrifice and loss of self. The performers meditated behind elaborate masks and costumes—although some bore nakedness—as a means to create a momentary ‘psychic cleansing’. These ideas that Genesis and her ‘participating beings’ played out were intoxicating and liberating to watch. For a moment one could feel a sense of the Nietzschean concept of sacrifice or loss—whereby a creative affirmation, or grand metaphysical gesture could be read in the simple task of drooling, crying and cutting an onion, and removing portions of hair and nails. These such processes explore physical extremities and emphasize the temporality of body.

This has of course been one of the underlying aims of performance art since its conception. The ritualistic nature of performing and or watching such a performance has a cathartic effect—when executed well. Choreographer Steve Paxton’s open rehearsals of his seminal postmodern works Satisfyin’ Lover (1967) and State (1968) did just that. From his simple instructions or scores, students had a strong dialogue between their bodies—a vibration according to Paxton. The subtleness of such a simple premise (the instruction to stand, walk, sit) effectively created this ‘vibration of bodies’ to the effect that Paxton described as a slippage of edges. Within 9 minutes he explained, the audience could move beyond their focus on the material world—looking as the shoes, hairstyles and attitude of the performers and see the movement as a whole, a hoard and as more of a sculpture than a performance. We saw in Paxton’s work much more sculptural and corporeal elements to his work—a result of his close connect to the dance world. This was perhaps the success of the 2012 workshop in all: the ability to appreciate and conglomerate three very distinct and diverse style and approaches to performance further proving that the age old ritual of performance has been accepted into the fold.