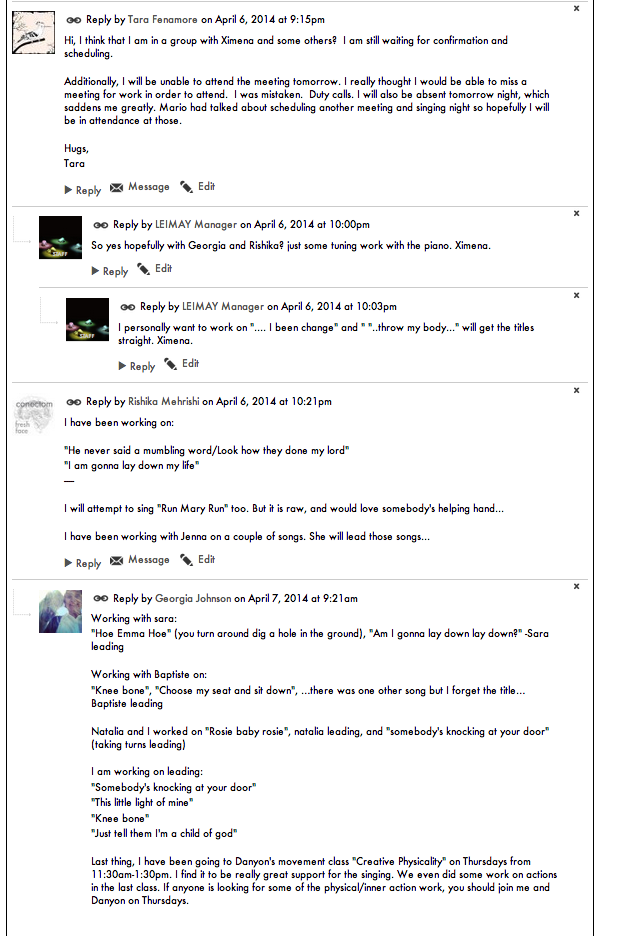 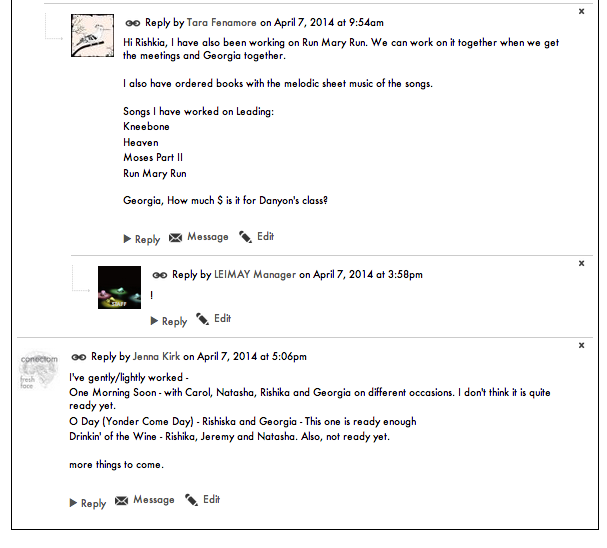 Replies to This Discussion

As I'm preparing the plan for each session and the song sequences, I'm seeing two things it would be very helpful for me to know in advance:

1. Who is attending or not each week.

2. What song you would propose to share during the work session that week -- if any.

So, I would like to ask that you all let me know these things by Friday night before each Monday meeting, so I don't have to switch things around in the moment as I've done the last two meetings and can be clear for you all.

[Remember, 1, not everyone has to lead a song, and, 2, sending a proposal to share a song does not guarantee it will happen (at least that week), and I almost certainly can't consider a proposed song for inclusion if it's not sent to me in advance. Sorry if this sounds strict, but a little clarity here will I think be good for us all.]

For those who did not attend last week's meeting, Mario has been very encouraging that we continue to move more and more to songs that we find on our own and start to leave behind some of those we learned from the Open Program. This will help in leading towards future activities with them. So, keep working on songs - as I know you all are doing - and in our work sessions we'll start to see how/if/when they move into the singing session.

I look forward to being with you all tonight.

I will be there tonight. I am working on: I've been Changed. If you or anybody know of any song that might be simple and good for me please let me know. Thanks,

Friday is almost over this week, and I've heard from only Jenna about attending Monday and songs. Anyone else?

LEIMAY Ensemble & Guest ColaboratorsPermalink Reply by Georgia Johnson on April 27, 2014 at 10:49am

Hola! Sorry, I only saw this now.

Now that I'm back and ready to settle down, I'll try to be more present.

Either everyone is communicating through email all the time, or there is little communication surrounding the Seed Group, despite requests from some members. Is there a common desire for us to be more active on this forum? And, what is in the way of that happening?

Anyhow, thank you Jeremy for orchestrating diligently our beginnings. I'll be there on Monday.

The songs I've been working on are:

- Choose Your Seat and Set Down (same version as Rishika's)

- Look Down That Lone Lonesome Road

(All taken from the two albums uploaded by Rishika)

I'd like to be able to present at least two of those on Monday, if possible.

I'm not sure what the consensus is about the songs one sings that others are working on already. Is bringing a diversity of interpretations fine? Would it be interesting to try to have two people leading a song (was that ever discussed with Mario)? Or should we decide who sings what and then move on to look for other songs?

To me, the most sensible approach would be to work these songs among those interpreting them so that we can refine each other's version, decide what version we stick to, who would lead and who would hold the space, and thus perhaps adapt one of the interpretations to become what the support group would sing--therefor bringing some sophistication to the choir melodies.

You guys let me know. Sing you soon-