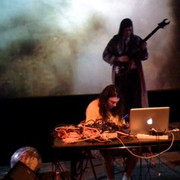 Jimmy Joe Roche is an American Visual Artist residing in Baltimore, MD. Roche is a member of the arts collective Wham City. His videos have screened internationally in venues including the Royal Academy of Arts in London, Boston Institute of Contemporary Art, J. Paul Getty Museum, Incubate Arts festival in Holland and Rojo@Nova 2010 in Brazil.

Tom Borax is a baltimore-based multi-media artist and instrumentalist. He uses a modular synthesizer to create small electronic ecosystems to react and play in. His work deals with extreme dynamics, frantic rhythms, and dissonant combinations of mathematical and animalistic/intuitive language.

David Wightman and Jacob Ciocci have been collaborating under the moniker “Extreme Animals” for over 10 years. For their Harvestworks project they are using Youtube clips of amateur drummers to create a virtual “drummer”. Using a MAX/MSP patch developed by Matthew Ostrowski, the duo is now a trio. A mashup of dozens of YouTube drummers follow along to David and Jacob’s music, which in this case is an interpretation of Meditation from Thais by Jules Massenet. Their overly dramatic rendition of this romantic-era composition, when combined with David and Jacob’s interactive video drummers, deals with the notion of the soloist as separate from the ensemble, and the individual as separate from the collective. The piece also explores the classical music technique of “rubato” (exaggerated, fluid, dynamic tempos) as applied to a MAX/MSP patch.