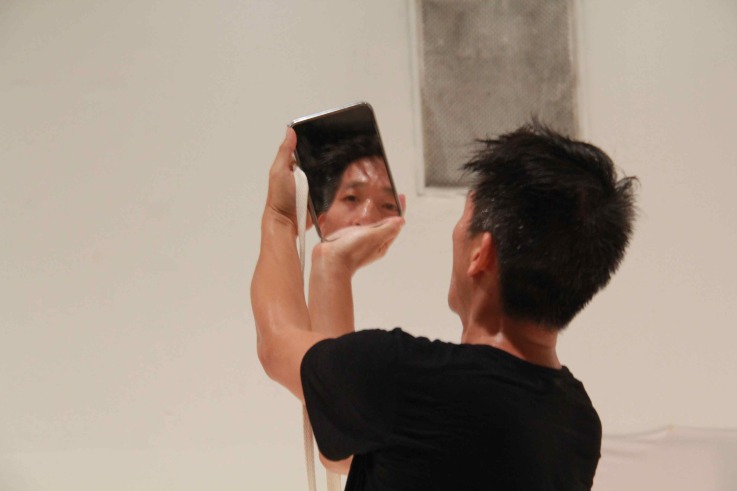 Sherwood Chen’s Mongrel presented at CAVE in LEIMAY’s At Home Series was an intimate invitation into the artist’s memories and relationships between cultural and personal experience. In light and darkness, moments of loss and of clarity, outward presentation and intimate vulnerability,  Chen’s Mongrel embodies the tensions of being in between oppositional places, languages and feelings. His work is an expression of a precarious sense of identity that is sometimes defined and sometimes lost in a web ancestry, history, nomadic life, and popular culture.

Chen introduces himself to the audience with a mirror around his chest. The mirror reflects corners of the space, angles of his face, as well as images of audience members. When we see ourselves it is unexpected, something we do not plan to see when we sit down to watch a performance. We are reminded of the action we each assume in this moment.   We see ourselves in his chest, and he invites us into his story.

There is a giant negative-image video of Chen, made by Sarane Lecompte and Justin Palermo, that is projected behind him. He seems to sing or incant in the video, at first with no sounds, followed by a contemporary composition by Italian composer Franco Battiato. Live, his still, quiet body on stage collapses.  On stage he is low and and fallen, while his face in the video is bright and passionately singing something unheard, de-synchronized from the sweeping, melodramatic strings of the music. The singing continues, and we are jolted from our chairs as the space immediately turns completely dark and the once quiet Chen suddenly creates a huge commotion, stomping and slamming around the space. The darkness is unexpected and terrifying at first, and I recall feeling anxious and with a loss of control for a moment. The performance world becomes lost as we cannot see anything and do not know exactly what is happening. The light, designed by Raul Zbengheci with Shige Moriya, slowly begins to seep in again in an uncanny, imperceptible progression. During the progression, Chen is constantly rhythmically spinning, for at least ten minutes. As we begin to see his figure we notice different shapes. His arms make clear, curved shapes, spirals going upward and downward. Yet between the shapes he spastically shakes his upper body in what seems effort to shake off the clarity of each pose, to brush it off and to try on a new one.

In another segment, Chaâbi music overcomes the space, this time with Chen lip-synching in person. He comes forward with a presentational, outward, and direct quality, as if he is impersonating a showgirl. While he sung passionately and dramatically in the video,  this time performs the song in a playful and showy manner with the bright stage lights on him. Both relationships feel stylized and performative as he puts on these two songs. However, there still exist multiple layers to these moments of song and silence. We see Chen fallen, open, with himself, with the audience, and in these incongruous, performative sequences we see him slipping with a desire to hold onto some sense of place in relation to the music.

As the performance slows down to become more intimate again. A striking image happens toward the end of the piece as Chen brings out a lamp and creates his shadow and silhouette.  The outline of his body is clearly defined as he takes up space in front of the glowing blue light, yet his features, clothes, and expression are not discernible and our common conception of his identity becomes suspended. 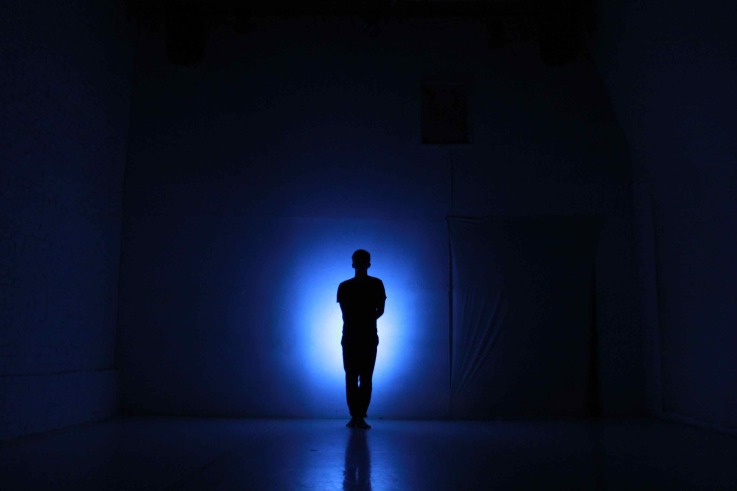 In speaking with Chen about his work, he reflected on a nomadic life as “a phantom in five cities,” currently not having a sense of a singular place to consider home, as he travels consistently at work between Brazil, the US and France. The iteration of Mongrel at LEIMAY itself was impacted by travel, stripped down of piles of costuming and props in order be more portable. While workshopping elements of the performance in San Francisco, he used a mass of clothing as costume and set, but scaled down to accommodate the nature of living out of a suitcase. "When I decided not to bring all of the props from San Francisco, it was both a direct economic consideration, and also an artistic challenge…to pare elements down to the bone to question if the material could  still hold up without bells and whistles, and to understand the bones of a dance. Fifty pounds, or 23 kilograms, has been a magic number that has been a concrete aspect of my life in the past years. I wanted to honor this banal luggage weight restriction respective to making this dance."

A large theme to the work is foreignness, in regard to Chen’s bicultural experience as a US-born Taiwanese-American, his relationship to genres which he considers foreign to his training which he explores in the solo (song, lip-synch, video), and the linguistically foreign choices of songs he used or sang in the piece. During Chen's performance this fall in Xavier Le Roy’s Retrospective at MoMA PS1, Chen spoke of his identity as a Taiwanese-American dancer, which often made him feel “like an island” in certain contemporary dance networks.

Chen’s relationship and use of the Chaâbi song links to an intimate personal history dating back almost twenty years ago. He first heard the popular Moroccan street song by Hamid Zahir on cassette in the 1990s, developing an affinity for and being moved by the song. After losing the source, five years ago he tracked down the song again online and downloaded it for keeps. It was during a training he led in Brussels, organized and co-taught with French choreographer Stéphanie Auberville in 2012, when he shared the song in a workshop. A French-Moroccan participant, Aïda Belhamd, heard it and shared with Chen how moved she was by the song, its cadences and vernacular, and how much it reminded her of her childhood and daily senses in the streets of Rabat. While the song deeply moved both Chen and Belhamd,  Chen was struck by the tension and gap between their respective experiences. For Chen, this song originated from a place and aesthetic which had no rooting in his personal history or memory yet moved him nonetheless. In this way, Chen notes that there is a kind of complicated "hierarchy" on which he and Belhamd stood in relation to this song.

In Mongrel, Chen investigates how close he can relate to this song without having any linguistic or ancestral ties to its origins. With the help of Belhamd, he transcribed and phonetically constructed or re-constructed the Moroccan Arabic verses, translated into French then to English, in the effort to lip-synch the work as an act of iterative translations and out of a desire to “wear the song,” to test the possibility and to examine and foreground how this act could fall short. In his lip-synching, even at its most exaggerated and presentational, he can never authentically embody the song.

In our meeting, Chen reflected on what kind of role popular culture plays in our personal experiences with foreignness and in our desires to connect with a sense of identity. I was reminded of his protracted spinning early in the piece. While creating Mongrel, Chen explains that this sequence came from him “scrapping and welding a combination of popular culture, personal historical reference and notions of magic compressed into a gestural language in the arms and hands."  He describes a sense of "placelessness and axis studies in the act of constant turning, and in the gestures the inability to settle into a single vein,  multiple keys without sure doors." As he spastically transitions from each gesture, it is as if he is trying on these different cultural elements in a whirlwind of fitting on certain identities and trying to find a sense of clarity in commotion.

Sherwood Chen’s Mongrel is a journey through Chen’s familiar and unfamiliar, secure and insecure relationships with ancestry, nomadism, popular culture, personal history, and cultural desires. The ins and out of bright light and utter darkness, the images in mirrors and silhouettes, Chen’s fallen quietness, loud chaos, clarity and spasticity, vulnerability and showy presentation express a slipping sense of identity in human experience characterized by oppositional elements of familiarness and foreignness.