ESSAY// where do we begin?: Thoughts on Absence

This past February I travelled to Texas with my company of dancers to present a few different pieces. We performed 3 film and performance works in Houston and a performance piece in Austin at a gallery. One of our pieces performed in Houston was titled ‘while you were away,’ and explores absence. In ‘while you were away,’ there is film that mirrors the dancers on stage, at times it mirrors them exactly and at times it reflects what they are not and what they could be, what it is not there and what could be there. These images of absence expose distance between the performers, making visible the poetics of loneliness. 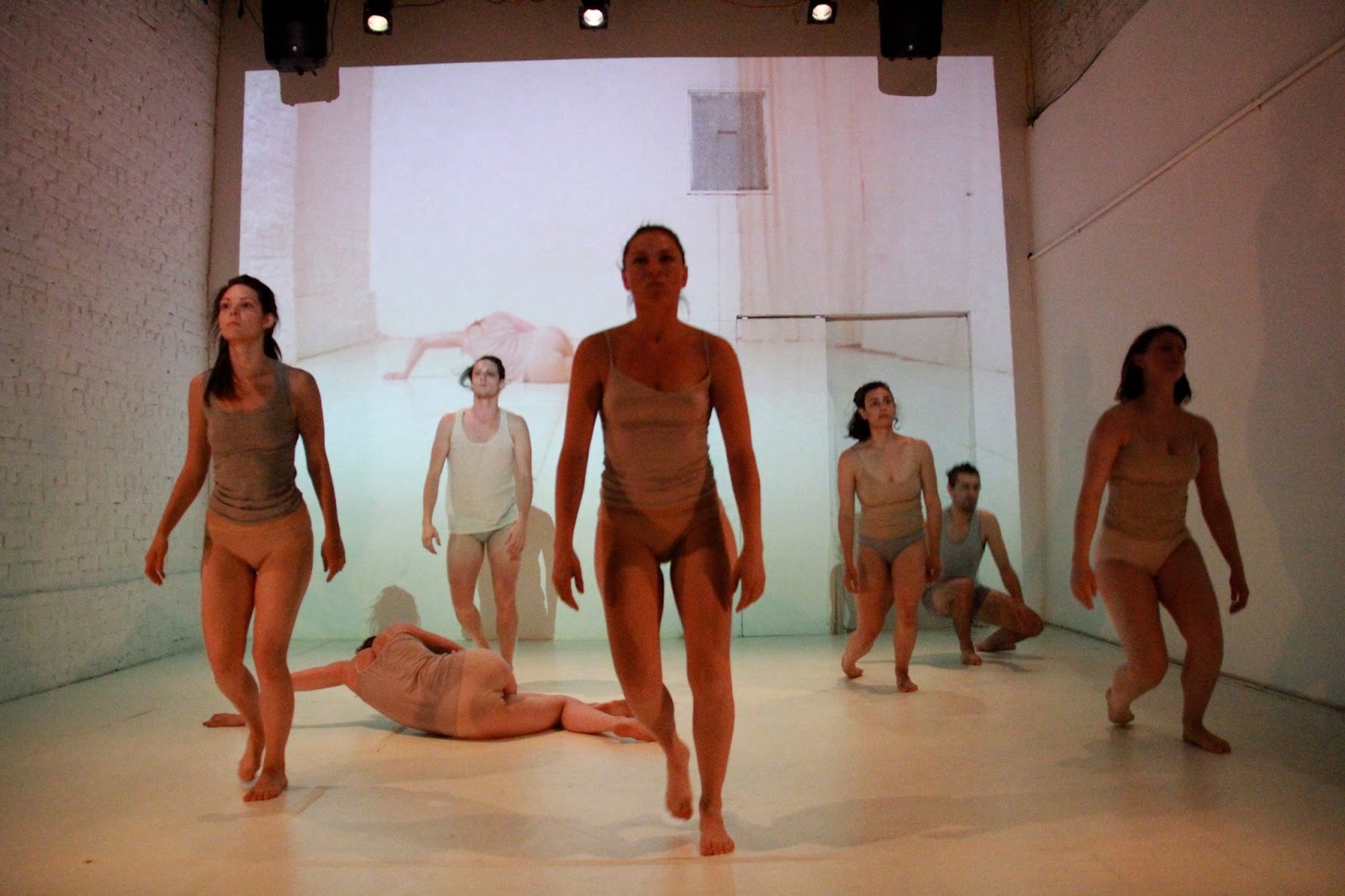 while you were away at SOAK at LEIMAY

We were preparing for the shows during and just following the inauguration, and all of us were anxious, pissed off, and angry. We carried these feelings to rehearsal as we simultaneously kept refining the work. We started creating this piece exactly a year ago (February 2016). We also performed this piece this past June at LEIMAY and this past September at Triskelion Arts. Following the inauguration, I was and still am experiencing feelings of dread and despair upon waking up and going to sleep. What have we come to?  I was not yet sure where to start. What could be meaningful and what could make a difference? At the time the Trump presidency felt invasive but also distant, and we were all uncertain about what could happen, how bad would it be.  But I am also someone who is in a position of privilege. His orders had not directly affected my life yet. I was engaging in these rehearsals and planning this production as I had planned my productions in the past, and I approached the process as if it had continued in the same manner since before Trump became a serious presidential candidate. I had the intention to let the election settle a bit before I discovered how I wanted to address it in my work. Or rather, I thought my work, unlike the world, had not been broken? Or in some way my artistic practice was separate from the state of the country? Was I waiting for it to break? Did I expect it to? I guess I assumed to be able to continue my practice and take care of myself and my dancers, and we would approach the subject when we were ready. I had the privilege to take this kind of time, or as someone of significant privilege, I assumed I had this kind of privilege.

There are two dancers in the company, Arantxa and Mario, who are from Mexico and Paraguay. Following the executive order from Trump, Arantxa had received a notice from her employer that she was advised not to travel at all. Both dancers had to meet with their lawyers and decide if it was worth the risk. If Trump changed anything about the order, they could be held. They had to be careful with the border patrol in Texas and bring all of their legal paperwork with them. Trump’s orders had not affected me this directly until that moment, when it directly challenged my work. And it specifically challenged this piece. In the piece, the performance is created to be in conversation with the video projected behind it, and it could not be performed in absence of the video. Well it could be performed without it, but the dynamics of it would unravel and it wouldn’t make much sense. And if we did use the video, and didn’t have Mario and Arantxa on stage, it would be strange and obvious that the dancers in the video were missing in the present moment. 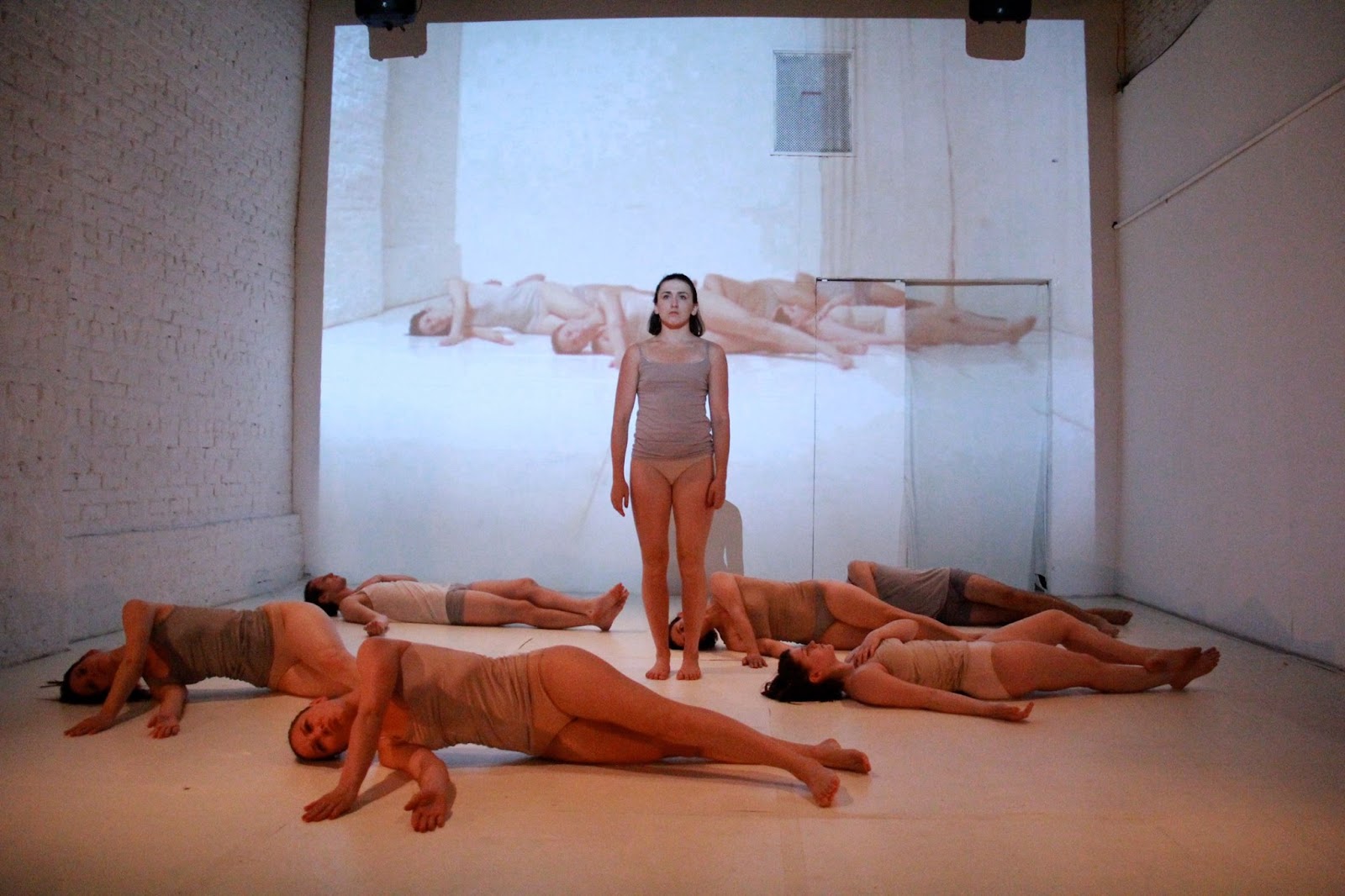 I was faced with the prospect of having to leave Mario and Arantxa in New York. What would the piece look like? There would be a stage full of North American, white artists with an obvious space, a hole, a gap in the configuration of the bodies. I considered having to cancel the event because it wouldn’t be worth it, or canceling because it wouldn’t be fair to the international artists to continue. I was disgusted that these two kind, gentle, hard working artists could be put into this situation. For the North American dancers, being stopped or profiled at the airport was never something we worried about. We had passed and continue now to pass through these institutions and across borders without worry for our safety, lives, or families, while watching and sometimes not always  realizing others being profiled. For Mario and Arantxa, going to the airport meant they had to risk their visa and their situation in the United States, or the other option would be to step away from the work they committed themselves to for the past year. 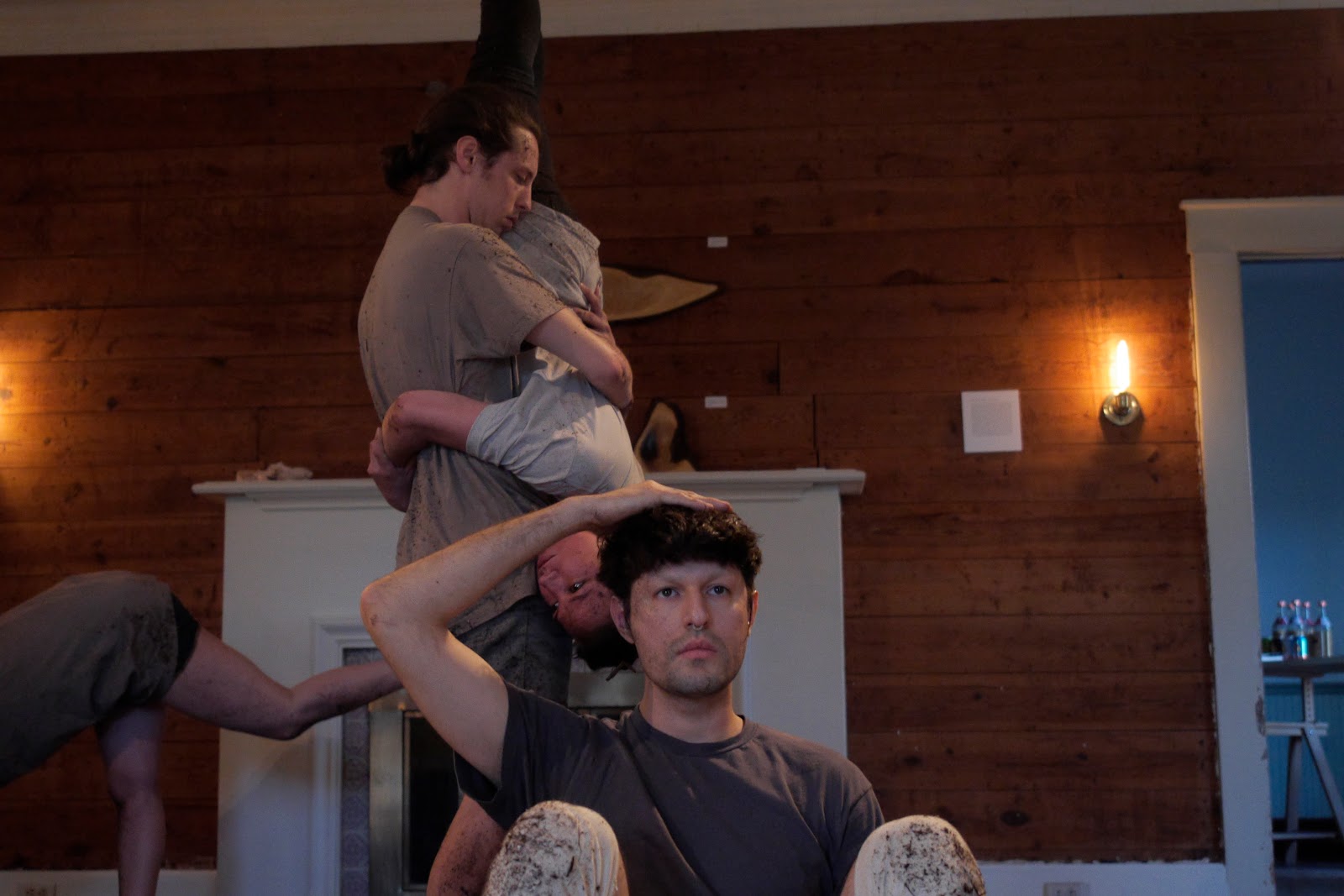 I create abstract pieces that uncover the dynamics of imagination and memory through creating dissonance and contrast between mediums and between performers. These pieces are interested in the possible existential structures involved in being a person in the world and the possibility to challenge or reimagine these structures. They often make tangible the sometimes uncomfortable distance between what we have come to assume as a culture and what we sometimes suddenly dream of. How could I reconcile my work and my vision with the current state of our country. Sometimes I say, my pieces are personal - but what does this mean? In this particular work, I have said I am interested in absence - a facet of being in the world that we all experience in virtue of being able to remember and to imagine what is not here in the present. It could be a sense of feeling and knowing what was, what could be, or what might be, or what had been or could have been, what we wish for but what is not, what we think of but what not is. And these are questions of potentials, possibilities, and futilities. 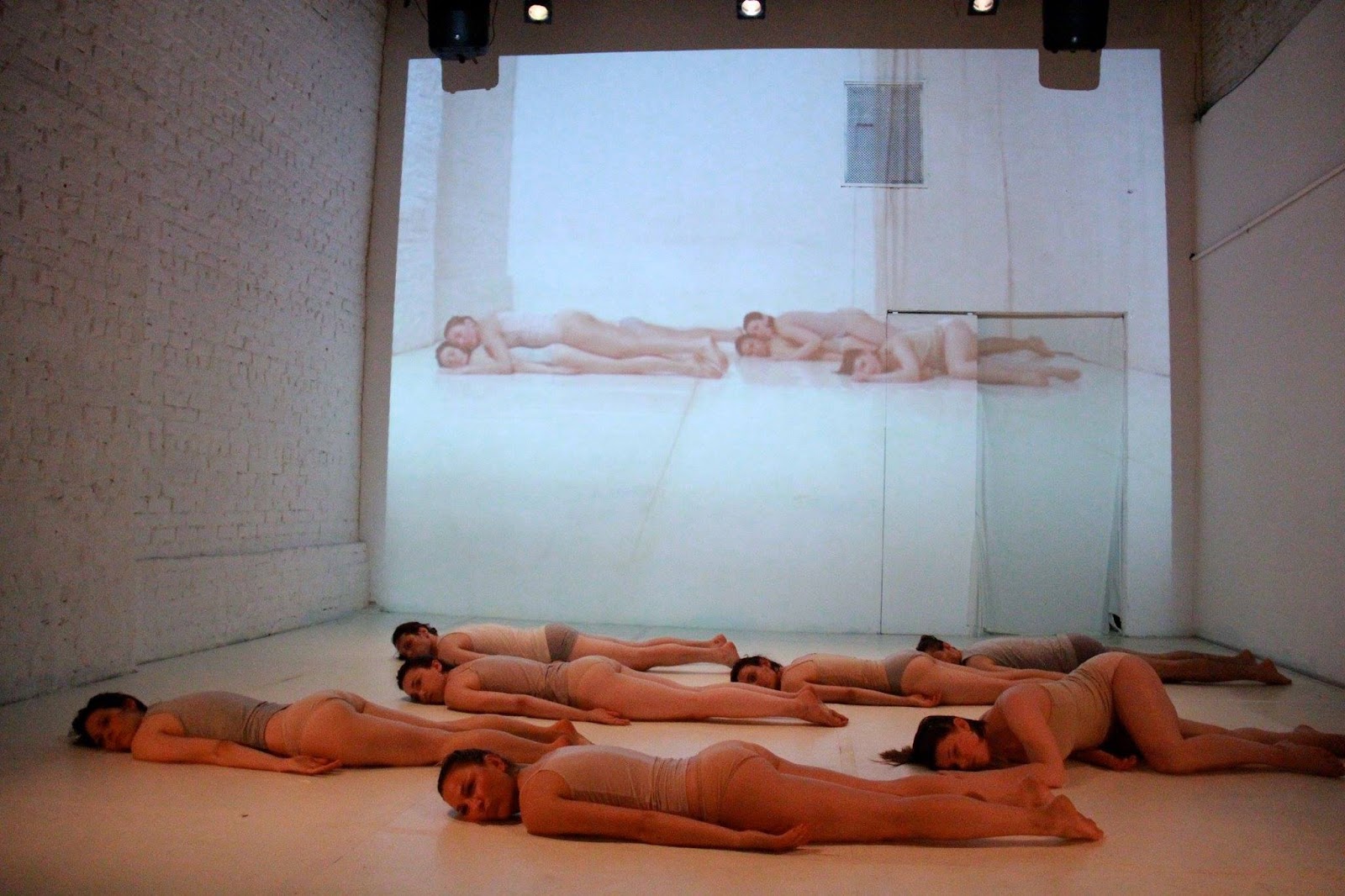 We all experience deep existential feelings, we all have feelings, all of our feelings matter. But for some people, the consequences of the election, the history of our country and our society have not only affected feelings but also lives, careers, and survival. The togetherness of certain families are put in dangerous positions. We should all honor our sadness, loneliness, and existential feelings that we have and we share in virtue of being people. And while all of these feelings matter, and the fact that we share these feelings matters, we must also recognize that specifically in our current political situation, the lives and the presence of certain groups and people are being threatened, and at this time in history - this matters more.  And for some of us, the togetherness of our families, the ability to pursue what we love, to be with loved ones in a stable, consistent way, remains as we continue our day to day life, and it appears that our lives are not broken, not in the same way that immigrants' families are consistently being broken. While I had thought I was taking time to find what the election meant for my work, my work was already breaking in virtue of being a part of this multiplicity of relationships and nets of interconnected dynamics in our country, and the country and the world are breaking and they started breaking long before I was born. I couldn't rely on my privilege to continue my work, unless maybe if I wanted to make work with only North American and white people for white audiences - and what would that be...

The election is happening in the work and it is happening in all of us and all over. We should recognize the different degrees to which we experience its effect. There is a greater amount of urgency for some people, and it is important to recognize what this urgency calls for. And for those of us in privileged positions - we can use our ability to imagine, maybe, what it could be like to not be as we are, to be in another position and to have life and what we love of it potentially taken away. We can act upon what we may learn about ourselves and the world around us from these imaginative experiences. 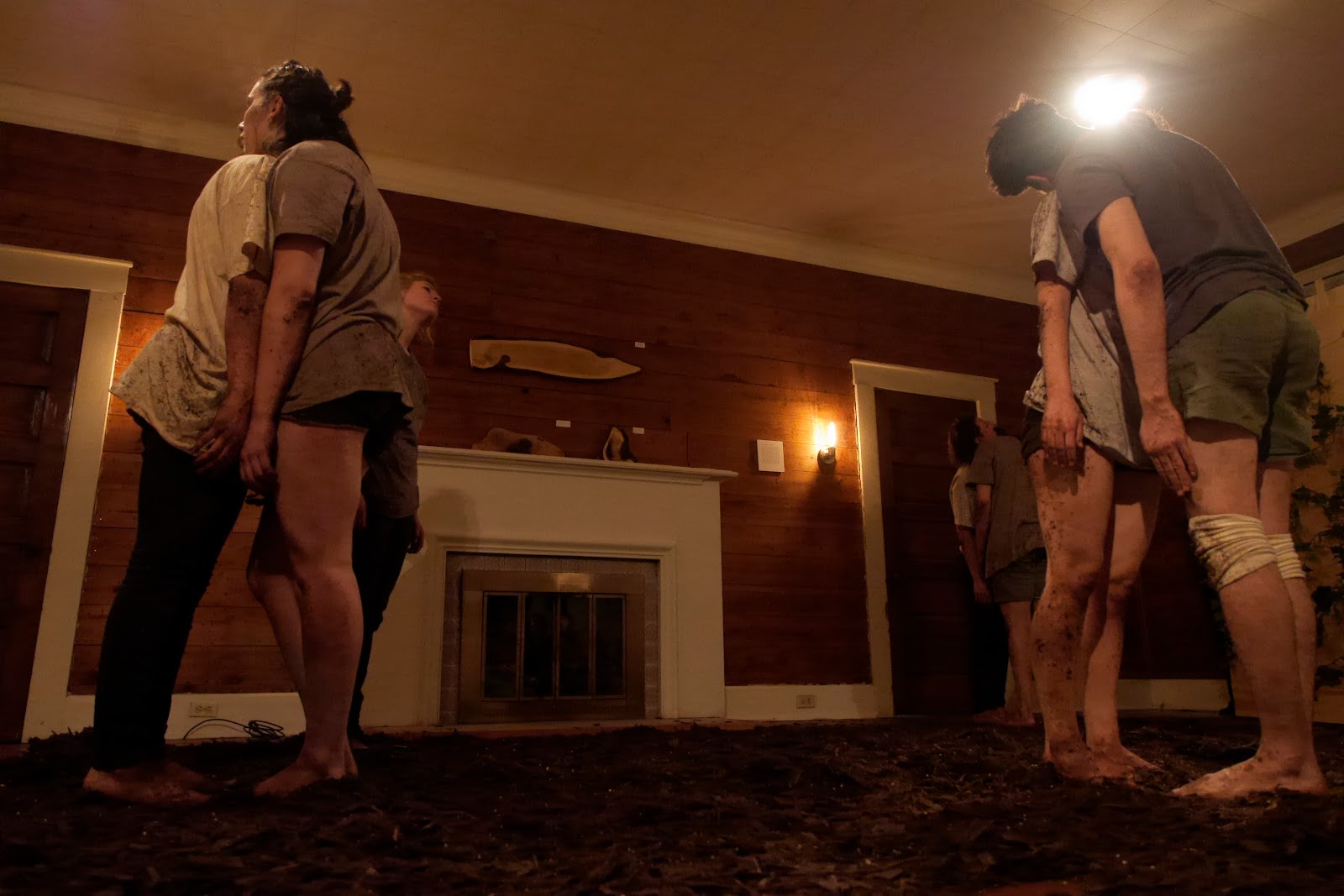 Mario and Arantxa were able to join us but if they had not, I would have still performed the piece, it would have been messy and it wouldn’t have made sense, but it would have been important. I'm pretty sure that this version of the piece would have been more important in that moment than the piece I originally created. Their absence would have been made present through the gap in the all white cast and the video image of their distant selves. This could have been a very meaningful and moving way to present the broken, fractured work and the implications that its brokenness has on the state of the world.  It would have been an opportunity to talk about absence and how the issues of the Trump presidency directly affected the work and the immigrants in it. Giving a short talk before the show could have been an effective way to allow the older generation of attendees from Texas (who very well may have voted for Trump) to uncover new realizations about our country.  It would hopefully have been clear how ridiculous it was that some dancers couldn't travel to Texas to perform in 'Lucy Kerr''s show because of this order - allowing these more conservative attendees to possibly encounter the sheer imbecility of Trump. This would have been rare occurrence and opportunity for them, as they are are consistently wrapped up in the safety nets of their society, where Trump's bigotry is and appears much less dangerous.

This is one of the millions of stories that demonstrate immigrants are integral to all systems, and in this case the system of this work, my tiny work in face of all of the country, but the work is still a system, and there was still a purpose to this performance. To imagine any structure or system of our society, including the most fundamental structures, without immigrants would be fractured.  And I wonder what this experience means for me. It is clear that my artistic process and production should shift.  The piece itself as I created it to be in June 2016 was an interesting and beautiful piece, but in January 2017, it did not feel as meaningful as  the possible piece that emerged after Trump's order, as a direct effect to Trumps order, but also as a recognition of it and a retaliation.  I'm not alone in asking, where do we begin? I'll begin with new research on meaningfulness in our current climate, asking how we can both continue to create works that are impactful in their indirectness and ambiguity as still and moving images, abstractions, questions, confusions, and reframed structures, but also in their understood social and political implications. And these works may at times be necessarily broken in their production or in their form, as my work was threatened to be made formally broken, because they may be without funding and support. But the futilities, these seemingly limited possibilities of our art works in the right now, speaks to the ill, tilted, and skewed social and political systems of our current situation but also to the possibilities of our power to analyze, comment, criticize, and make tangible within and in resistance to these systems. while you were away at SOAK at LEIMAY, photo  by Shige Moriya I Feel The Earth Move at MILK + Cereal, ATX, photo by Jackson Alexander